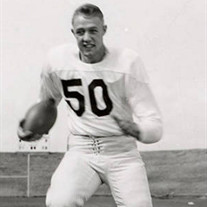 Bill Lawr, age 88, passed away on Monday, December 13th at Kadlec Hospital in Richland from natural causes. Bill was born on October 5th, 1933 and spent his youth living in Weiser, Idaho. He attended the University of Idaho on a football scholarship, joined Navy ROTC, and eventually was commissioned as an officer in the Marine Corp, where he served in Okinawa with the 3rd Division, 3rd Battalion Armored. He was honorably discharged in 1958. A few years later, while on a business trip to Canada, he met his wife-to-be, Rae. They were married in 1962 in Calgary (his brother, Alex, was his best man). Bill eventually took a job with Roger's Canning of Walla Walla. In 1973, Bill became Operations Manager of the Roger's facility in Pasco. He moved to the Tri-Cities with Rae and his two sons, Scott and Kevin, bought a home in Kennewick, and lived there until 1995. During those years he was an active member of Saint Joseph's Parish, Knights of Columbus, and Saint Vincent DePaul's. He was also a devoted Oldsmobile man, as he took his family on numerous vacation trips around Washington, Idaho, and Canada in a giant 1975 Oldsmobile Cutlass Cruiser station wagon. After retiring in 1995, Bill and Rae moved to a new house in Pasco adjacent to the Pasco Municipal Golf Course, where he and Rae golfed frequently. They travelled extensively, continuing their yearly trips through the states and Canada. Their travels took them to New Zealand, Australia, Ireland, the UK, Germany, France, and Austria. Bill was not only a devoted husband and father he was an uncompromising good guy. Always a man of honor and tradition, he was "old school" in every way. Bill was also generous, gentle, and kind. Every year he made significant donations to St. Jude's Hospital to honor his son Scott who, in 1980 at the age of nine, died from Leukemia. After his beloved wife Rae passed away on Christmas day in 2009, he experienced a period of profound grief that stayed with him for quite some time. He spent his remaining years at his home on the golf course, where he prayed the Rosary, read volumes of books, and enjoyed visits from Kevin and his wife, Autumn, and his cousin (and best friend) Terry Ogden. Bill was preceded in death by his son, Scott; his wife, Rae; his sister, Zella; and his brother, Jack. He is survived by his son, Kevin; his two remaining brothers, Leonard and Alex, and numerous nieces and nephews. If Bill could, I'm sure he would thank Andrea Ochoa and the crew from the Pasco Pizza Hut for going the extra mile on his behalf. He'd also thank the kind and attentive EMTs from the Pasco Fire Department, the wonderful folks from Meals on Wheels, Dan Patridge for his steadfast reliability, and the kind, caring staff of Home Instead. Finally, and without question, Bill would show his gratitude to Terry Ogden for the lifetime of friendship and support. Terry, you were always there for him.

Bill Lawr, age 88, passed away on Monday, December 13th at Kadlec Hospital in Richland from natural causes. Bill was born on October 5th, 1933 and spent his youth living in Weiser, Idaho. He attended the University of Idaho on a football scholarship,... View Obituary & Service Information

The family of William Thomas Lawr Jr. created this Life Tributes page to make it easy to share your memories.