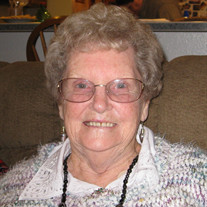 Verla Jessie Baxter, 90, passed away October 18, 2019 in Kennewick, WA. Graveside services will take place on October 29, 2019 at 1:00pm at the Mueller's Desert Lawn Mausoleum in Kennewick, WA. Verla was born June 27, 1929, at Snyder, CO. She was the 11th of 12 children to Sylvia and Lawrence McDermott. She lived most of her young life in Adrian, OR where she met and married Bill Baxter on January 27, 1951. They were married for 60 years before he passed away in 201l. In 1954 they moved to the Tri-City area where she and Bill raised 3 children. She also worked several years as a cook at Vista Elementary in Kennewick. In 2015, Verla met and married Ernie Luke. Verla enjoyed sewing, painting, reading, fishing, camping and traveling. Verla is survived by two children, Darrell Baxter (Delene) of Kennewick, and Lanae Legard (Joe) of Kennewick, two siblings, Velma Derrick of Canada and Bud McDermott (Charlotte) of Hermiston, OR, 4 grandchildren, and 6 great-grandchildren. She is preceded in death by 4 brothers and 5 sisters, her husband, Bill Baxter, her second husband, Ernie Luke and her daughter, Debra D. Baxter. The family suggest that in lieu of flowers, donations be made to the Hospice House in Kennewick, WA

The family of Verla Jessie Baxter created this Life Tributes page to make it easy to share your memories.