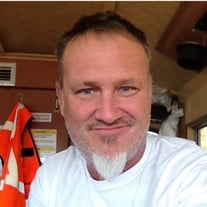 Tracy Owen Hall passed away peacefully on Wednesday, August 3rd, 2021. He was born August 14, 1964, in Kennewick, Washington. He was the eldest child of Butch and Sharon Hall. As Tracy loved to say, "finally 9 years 9 months and 9 days later he became a big brother to Jason Hall." Tracy loved being a big brother and the fact that they worked together at the railroad gave him great pride. Tracy lived in the Tri Cities all of his life. Most of his childhood was spent in Pasco, Washington. However, he did graduate from Columbia High School in Burbank, Washington. Tracy worked several different jobs including the Carpenters Apprenticeship before being hired at BNSF in 1990 as a Conductor where he worked until his passing. He enjoyed working at the railroad with the many friends he made throughout his career. He was also the Secretary of his Local Union 997. One of Tracy's greatest joys was being on his Harley and riding with his "brothers" Lance, Paul, Mike, Mark, Steve, Pedro, Kelly, Shawn, Chris and Mason. He loved the freedom that riding gave him and the peace he found riding the paths less traveled. Tracy was an amazing person, friend, son, brother and step dad. He would do anything for them. He leaves behind his dad, Butch Hall and stepmother Claire, brother Jason Hall and wife Lainie, niece Oshen Hall, nephew Curry Hall, great nephew Easton, great niece Margo, the love of his life Julie Meyer and stepchildren Victoria and Tyler McNutt, and Brodie White, along with many aunts, uncles, cousins (Hall, Mansfield and Shephard's). He was preceded in death by his mother, Sharon Mansfield-Hall. He will be forever loved and missed.

Tracy Owen Hall passed away peacefully on Wednesday, August 3rd, 2021. He was born August 14, 1964, in Kennewick, Washington. He was the eldest child of Butch and Sharon Hall. As Tracy loved to say, "finally 9 years 9 months and 9 days later... View Obituary & Service Information

The family of Tracy Hall created this Life Tributes page to make it easy to share your memories.