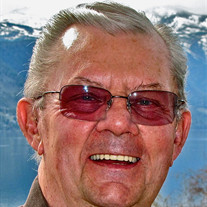 Thomas W. (Tom) Woods passed away peacefully on Monday, August 3, 2020, after a long struggle with the aftermath of bladder cancer. He was given 87 years on this Earth to accomplish the purpose for which his Lord Jesus Christ placed him here. Faith was the center of his life and he had a passion for studying Scripture and Bible teaching. He hoped if he would be remembered for anything it would be for his Christian teaching and writing. Tom was born in Parsons, Kansas to Roy and Zaida Woods. Following high school Tom attended the University of Kansas and joined the Air Force upon graduation. He was a U. S. Air Force jet fighter pilot and accomplished aeronautical engineer retiring as a Lieutenant Colonel after 22 years of flight test and development of many well known Air Force aircraft including the B-52, F-111, C-17 and F-16. His license plate displayed the F-16 for which he was the lead responsible officer in the Pentagon during development of this famous jet fighter. After retiring from the Air Force and some consulting work, he came to the Tri-Cities in 1981 to live in the Pacific Northwest near the mountains and forests he loved. During his aircraft engineering years he was a leading participant in the emerging technology that became known as the development of complex systems, or Systems Engineering (predating the use of the same term in the computer software field). He was invited here in 1981 to apply these technologies to the investigation of the Hanford site as a potential location for a deep geologic disposal repository for nuclear waste. During his 17 years of work here, he became somewhat prominent in the nuclear waste community and was invited to conduct a first-of-a-kind system analysis of the national program for nuclear waste disposal at the Department of Energy Headquarters in Washington, D. C. and at Yucca Mountain, Nevada. He was also known for his leadership in the American Nuclear Society. He taught widely in the U. S. and internationally. At its organizing conference in Stockholm, Sweden in 1994 he was named Executive Director of the International Institute for Nuclear Waste Disposal. He retired from Hanford work in 1998. Tom leaves behind his two sons, Jeffrey and Gregory, and three grandsons, Will, Conley, and Ron; all living in the mid west he regretfully did not get to see them often. Thankfully, they were at his bedside the day before he died. He also leaves behind his loving wife, Eleanor, who remained at his elbow through his final days, as were her caring children and grandchildren. He is also survived by his sister, Mary Ann Lancaster of Springfield, Virginia, and by his brother, Jim Woods of Lawrence, Kansas. He was an ardent Seattle Seahawks fan until his death. GO HAWKS! Tom requested that in lieu of flowers donations be made to Wounded Warriors. The family invites you to sing the online guestbook at www.muellersfuneralhomes.com

Thomas W. (Tom) Woods passed away peacefully on Monday, August 3, 2020, after a long struggle with the aftermath of bladder cancer. He was given 87 years on this Earth to accomplish the purpose for which his Lord Jesus Christ placed him here.... View Obituary & Service Information

The family of Thomas W Woods created this Life Tributes page to make it easy to share your memories.