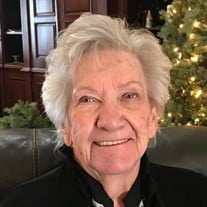 Shirley Ann Empey June 15, 1931 - May 11, 2021 Kennewick, Washington Just as the sun was rising on Tuesday morning, May 11, 2021, Shirley Ann Empey passed peacefully to the next part of her life, leaving behind a legacy of generosity, service and family. Shirley was born June 15, 1931 to William Coral Allred and Anne Foster Taylor at the family farm house in Lorenzo, Idaho. She attended school in Idaho Falls, Idaho and later attended Ricks College in Rexburg, Idaho. She always enjoyed music and became an accomplished violinist. Her musical talents she shared with others her whole life. She married Jarl Floyd Empey in the Idaho Falls Temple on June 6, 1951. After living in Idaho and California while Jarl was in the Navy, they eventually moved to the Columbia Basin. They first lived in Warden, Washington and eventually Basin City, Washington where they spent the rest of their lives. Jarl and Shirley were farmers that raised many different crops, but they always said their best crop was their four children. Shirley was known for making a home out of anything from a dugout basement to a shed. She was always resourceful and generous with everything she had, and taught her children how to work and be grateful for all of their blessings. She was a classy lady, never judgmental and always possessed a positive attitude. Shirley was always an active member of the Church of Jesus Christ of Latter-day Saints and served faithfully in many callings. She and Jarl served a full-time mission in Little Rock, Arkansas. She is preceded in death by her parents, her husband of 58 years Jarl Floyd Empey, her sister Barbara Bowen, her brother Paul Allred and her Son-in-Law Troy Collins. She is survived by her children and spouses, Nolan and Jennifer Empey, Kim and Lanette Empey, Lance and Janet Empey and Laurie Ann (Empey) Collins, 17 grandchildren and 27 great grandchildren. A reception to greet family members will be held at the Basin City Chapel of the Church of Jesus Christ of Latter-Day Saints located at 160 Bailie Blvd. from 8:30 - 9:30 AM followed by the funeral service at 10:00.

Shirley Ann Empey June 15, 1931 - May 11, 2021 Kennewick, Washington Just as the sun was rising on Tuesday morning, May 11, 2021, Shirley Ann Empey passed peacefully to the next part of her life, leaving behind a legacy of generosity,... View Obituary & Service Information

The family of Shirley Ann Empey created this Life Tributes page to make it easy to share your memories.