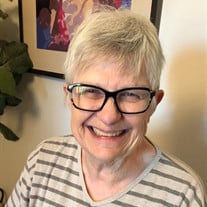 Obituary for Sharon K. Frymier On May 6, 2021 our beloved mother, Sharon Frymier, passed away. Sharon was born Sharon Nance in Prescott, Arizona on June 19, 1944 and died in Seattle, Washington on May 6, 2021 due to complications from surgery. Sharon attended Fruitland Elementary where she met her two lifelong friends, Linda (Brown) Lambert and Marcia (Slagg) Leavitt. She attended Kennewick High School where she graduated in 1962. Sharon attended Central Washington University where she obtained her teaching degree. Her first teaching position was 2nd grade at Edison Elementary School for the Kennewick School District. After she married Larry, she taught a few years for the Bothell School District, in Bothell Washington. Returning to the Tri-Cities area in the early 1970's, she was a stay-at-home mother for several years before returning to work for the Kennewick School District in the 1980's. She taught at Fruitland Elementary and at Lincoln Elementary until the time of her retirement in 2009. Sharon joins her late husband, Lawrence Frymier, her parents, Milo and Viola (Kozacek) Nance, In-laws William Frymier Sr. and Irmae (Biava) Frymier. Sharon is survived by her two children and their spouses, Amber Frymier and Christopher Baker and Autumn (Frymier) Lawr and Kevin Lawr, her beloved brother, Milo Nance Jr. (Bud) and his wife, Connie (Jungmann) Nance and many loving family members and friends. A celebration to honor and remember my mother, Sharon Frymier, will be held at Desert Lawn Memorial Park in Kennewick at 1401 S. Union Kennewick, WA 99338 for a graveside service on Saturday, May 22 at 1:00 PM. In lieu of flowers, a donation to Mikey's Chance Canine Rescue, Benton Franklin Humane Society, POPP (Pet OverPopulation Prevention) in her name.

Obituary for Sharon K. Frymier On May 6, 2021 our beloved mother, Sharon Frymier, passed away. Sharon was born Sharon Nance in Prescott, Arizona on June 19, 1944 and died in Seattle, Washington on May 6, 2021 due to complications from... View Obituary & Service Information

The family of Sharon Kathleen Frymier created this Life Tributes page to make it easy to share your memories.