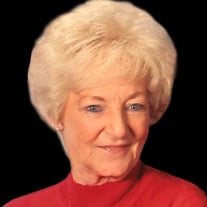 Rita Ann Shuck, 79, went to be with the Lord on Wednesday, January 6th, 2021, surrounded by her loved ones. She is no longer suffering with the pain that she lived with for many years. Rita Ann Mayes was born into a loving family on February 21, 1941, in Evansville, IN, where she grew up and graduated from North High School in 1958. She always considered herself a "city" girl but met and fell in love with a country boy named Ron Shuck. She and Ron married on January 2nd, 1961, at the local Lutheran Church while he was on a quick military leave. They celebrated their 60th wedding anniversary together just days before her passing. When Rita became a Navy wife at 20 years old, she embraced all that military life had to offer. She loved everything about it, from base housing to the Officers Club! She devoted the next 27 years to supporting Ron's career, while raising their daughter, Kim, and son, Chris, often as a single mom while Ron was away at sea. As is common with military families, they moved every 2 to 3 years, and Rita put her gifts to good use, making each base house into a "home" for her family. While they lived in Charleston, SC, she was active in the Navy Wives Club, and was a member of a women's bowling league when they were stationed in Bremerton, WA. Once their children were in school, Rita also worked as a dental assistant. Rita and Ron made lifelong friends in the Navy that have become family. After Ron's retirement from the Navy in 1985, the family settled in Pasco, WA. Rita and Ron quickly became part of the Franklin County Volunteer Fire Department family, where Rita was an active member of the Ladies Auxiliary and the couple continued to make lifelong friends. Kennewick First United Methodist Church is Ron and Rita's home church. Rita loved to cook, and she was a good one! She made the "BEST fried chicken" around according to some sources! Her favorite holiday was Thanksgiving, which she loved to host, cooking for everyone. Rita had a tender heart with a spunky attitude, which meant that you always knew her opinion on things! Shopping was an activity she really enjoyed; she would often say, "I must have money because I still have checks!" Rita was always "put together" whenever she left the house, hair done, nails done, and dressed in cute jeans! She loved planting flowers in the spring, her favorites were petunias. Loving to travel, she and Ron went on several cruises, made many trips to Indiana to see family, and enjoyed camping in their motor home. Rita always said her greatest accomplishment in life was raising her and Ron's children and then watching them raise their families. She was a devoted grandmother to her grandchildren, Tyler, Jason, Hailey (Kyle), Colton, and Kayla, and great-grandchildren, Kaiden and Lane. For the last several years Rita suffered from debilitating back pain and she slowly slipped away from her family because of dementia. We praise God that she is no longer in pain. She will forever be in our hearts. Rita is survived by her husband, Ronald G. Shuck, and her children, Kim (Mike) Boice and Chris (Roxann) Shuck; her grandchildren, and her great-grandchildren. She is also survived by her brother Ronald Mayes. Rita is preceded in death by her parents, Irene and George Mayes, and her sisters, Carolyn Reynolds and Betty Dodd. The family would like to thank Home Instead and Tri-Cities Chaplaincy Hospice for the loving care provided for Rita. Donations in Rita's memory may be made to Tri-Cities Chaplaincy Hospice, 2108 W. Entiat Ave., Kennewick, WA 99336.

Rita Ann Shuck, 79, went to be with the Lord on Wednesday, January 6th, 2021, surrounded by her loved ones. She is no longer suffering with the pain that she lived with for many years. Rita Ann Mayes was born into a loving family on February... View Obituary & Service Information

The family of Rita Ann Shuck created this Life Tributes page to make it easy to share your memories.

Rita Ann Shuck, 79, went to be with the Lord on Wednesday, January...