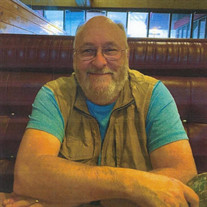 Richard G. (Rick) Terway passed away on June 24th, 2021, after a courageous battle with cancer. Rick was born on June 14, 1953, in Crookston Minnesota. He graduated high school in 1971 and earned a bachelor’s degree from the University of Minnesota, Crookston. Rick was a proud member of the White Earth Indian Nation. In Beaulieu Minnesota, his great grandparents helped build St. Joseph’s Catholic Church where Rick helped to serve communion at his great grandparents 50th wedding anniversary. He was also an altar boy at St. Anne’s Catholic Church in Naytahwaush, Minnesota. Rick is survived by his wife of 34 years, Helen. He had two stepchildren, Krista Worley, and Jeff Worley, his daughter-in-law Tracy Worley and three precious grandchildren, Kylie, Braden, and Aubreigh Worley. Also surviving is his sister, Barbara Terway and numerous cousins, nieces, and nephews. Rick was preceded in death by his mother Erma and father Vere. Rick retired from the City of Pasco as Public Works Director in 2018. While at the City, he was involved with the city council and was also a member of the Kiwanis and Elks. He was also a member of the Blandin Foundation, where he interviewed many candidates for grants for a natural aquatic center. Early in his career, he worked for the Washington State Parks as a park ranger at Lyons Ferry and Sacajawea State Park. He also worked for the U.S. Forest Service and was a ranger at Stehekin, Washington. While there, he was instrumental in helping to create the Youth Conservation Corp. Rick earned many certificates and awards during his working career. Rick was an avid Minnesota Vikings and Minnesota Golden Gophers fan and never missed a game either in person or on tv. A celebration of life will be held for Rick on Thursday, July 8th, at 1:00 P.M. at the Hope Tri-Cities Church at 700 Comstock in Richland, Washington. The family invites you to wear Minnesota Vikings apparel or purple and gold. In lieu of flowers, the family suggests donations to be made to the American Diabetes Association or the American Cancer Society.

Richard G. (Rick) Terway passed away on June 24th, 2021, after a courageous battle with cancer. Rick was born on June 14, 1953, in Crookston Minnesota. He graduated high school in 1971 and earned a bachelor&#8217;s degree from the University... View Obituary & Service Information

The family of Richard "Rick" G. Terway created this Life Tributes page to make it easy to share your memories.