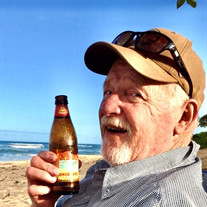 Richard J. Manka II (Rick), 69, passed away June 12, 2020, at his home in Kennewick, WA with his wife and kids by his side. Rick was born in Sunnyside, WA to Richard J. and Maureen (Hunsaker) Manka. He graduated from West Valley High School in Yakima, WA. He worked many different jobs throughout his career including fishing on boats in Alaska, as a heavy machine operator, Martin Marietta/Commonwealth aluminum plant, and he medically retired from Mt. Hood Beverage as a draftsman. He met the love of his life, Linda (Sheppard) Smith, on a blind date and they married November 11, 1983 in Yakima, WA. Together they enjoyed traveling, camping, and spending time with family and friends. Rick loved every minute spent with family and friends and took great pride in his two kids and grandchildren. You could always find him supporting his kids' and grandkids' sporting events and activities. He was a fun and loving Papa who would spend hours playing games with his grandkids. His door was always open and he welcomed his kids' friends and their families with open arms. To many of these friends he was known as "Pops" or "Dad." He would lend a helping hand to anyone in need and his contagious laugh and smile brought joy to all those who met him. Rick was a talented woodworker and a jack of all trades. He had an in-depth knowledge of history, government, the bible, and loved exploring new places on his travels with his wife and family. He is survived by his best friend and love, Linda Manka; daughter, Melinda (Mindy) Miley; son, Richard (Rick) James Manka III and wife Alison Manka; grandaughter, Alyvia Miley; grandson, Deegan Miley; brothers Tim Manka, Carrell (Barb) Manka, Kenneth (Belita) Berry; sisters, Kathy Manka, Karen Erickson, and Maureen Manka; mother-in-law, Marvel Sheppard; sister-in-laws, Kathy (Dick) Wood, Annette (Willie Brooks) Sheppard, Lori (Ken) Oldfield; brother-in-law Robert (Kelli) Sheppard; multiple nieces and nephews, great nephews and great nieces. He would have also liked to acknowledge all of his daughter's and son's friends that became additional daughters and sons in our family. Rick was preceded in death by his parents and brother, Darrell Manka. A celebration of life will occur at a later date. In lieu of flowers, donations may be made to St. Jude Children's Hospital.

Richard J. Manka II (Rick), 69, passed away June 12, 2020, at his home in Kennewick, WA with his wife and kids by his side. Rick was born in Sunnyside, WA to Richard J. and Maureen (Hunsaker) Manka. He graduated from West Valley High School... View Obituary & Service Information

The family of Richard J Manka II created this Life Tributes page to make it easy to share your memories.