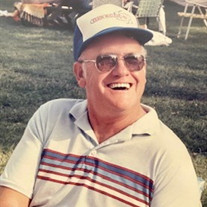 Raymond Dean Reid Richland, WA August 9, 1928 - July 16, 2021 Ray Reid, age 92 and a resident of Richland, WA, passed away at his home on Friday afternoon, July 16, with family members by his side. Ray was raised in Bend, OR where he attended primary and high school. He was later called to serve in the Navy during World War II in 1946-1948 as a Seaman 2nd class. Ray later earned his GED at Pasco High School and worked for General Electric and Battelle for 20 years as an Operator Tech, then worked at Exxon Nuclear for 15 years as a Welding Engineer and retired in April 1986. Ray enjoyed camping, hunting, fishing, and many weekends horse riding generating life-long memories for his family. He became an avid golfer after his retirement in 1986. He was a long-time member of the West Richland Golf Club "super seniors" and would play cribbage and golf every morning until a shoulder injury side lined his golfing. He continued to play cribbage with his buddies until COVID side lined that activity as well. He will always be grateful to Michelle Marcum for her warm and inviting clubhouse environment. Ray enjoyed going to Lincoln City, OR for getaways with Becky, his longtime companion. They would also go on cruises and road trips together. Becky contributed greatly to seeing he got his dinners and would visit often. Ray is survived by his son Larry (Judy), son Mike (Kathleen), daughter Sheri Johnson, his companion and dear friend Becky Rink, and numerous grandchildren, great-grandchildren, and great-great-grandchild. Ray is preceded in death by his parents, Homer and Lilly Reid, his siblings Gerald, Homer, Cecil, Hazel, Esther, and Opal; his loving wife of 60 years Bette (Rink) Reid; and a granddaughter Stacey Reid. The viewing will be held on Thursday, July 22 at 4:00 p.m. to 7:00 p.m. at Mueller's Funeral Home located on Union Street in Kennewick. The Graveside Ceremony where he will be laid to rest will be on Friday, July 23 at 11:00 a.m. at Desert Lawn Memorial Park. A Celebration of Life will be held at the Central United Protestant Church at 1:00 p.m. on Friday, July 23, located on Stevens Drive in Richland with a cookie reception following. Then at 2:45 p.m., there will be a reception with food and beverages available for friends and family members at the West Richland Golf Course. The family would like to thank the nursing team at Reliable Healthcare and Heartlinks Hospice and Palliative Care for their wonderful care provided to our father. We are deeply grateful for your service. Ray was a devoted husband, father, grandfather, great-grandfather and great-great-grandfather. He was a good friend to many people and will be missed by all who knew him.

Raymond Dean Reid Richland, WA August 9, 1928 - July 16, 2021 Ray Reid, age 92 and a resident of Richland, WA, passed away at his home on Friday afternoon, July 16, with family members by his side. Ray was raised in Bend, OR where he attended... View Obituary & Service Information

The family of Raymond Dean Reid created this Life Tributes page to make it easy to share your memories.