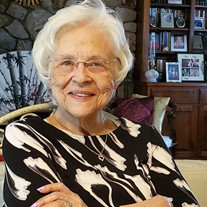 Patricia Ann "Patt" Elam, 87, of Kennewick, WA, entered the loving presence of her Lord and Savior on September 11, 2020. Patt was comforted in her last days by her husband, Billy James Elam, and her loving family. She died of natural causes. Patricia was born January 21, 1933 to Theo Pollock and Edna Pollock (Eppler). Her grandparents, Ada and Harry Anderson helped raise Patt, and she enjoyed living and working on her grandparents' farm in Lone Grove, OK, where they raised chickens, beef and milk cows and a variety of crops. It was her grandfather Harry who instilled in her a lifelong love of learning. When Patt was ten years old, her mother married John S. Hixon, and Patt was adopted. In her early teens, Patt enjoyed playing trumpet in her high school marching band in Missouri. The family moved back to Duncan, OK, her sophomore year in High School where she was an excellent student and worked during Distributive Education at the local movie theater selling tickets. It was her visibility in the ticket booth which caught Billy James Elam's eye and his heart. Patricia and Billy married in April of 1950 after knowing each other only two weeks. They celebrated their 70th Wedding Anniversary in April 2020. During the first ten years of marriage, Patt and Bill welcomed four children into their home. It was not until all the children left home that she continued her formal education by enrolling at the State University of New York Oswego where she graduated Magnum Cum Laude with a double major and double minor in just two years! She had a mind that was curious about everything. Though raising her children and creating a home was her ideal dream, she enjoyed working through the years as a ticket taker at the movie theater, a mechanical draftsman, church secretary, hospital receptionist, gift shop owner, and retail salesperson. Throughout her life Patt volunteered her time in her church, community, and abroad: teaching in Girls Auxiliary, Women's Missionary Union, Sunday School, Church nursery, Church choir, Crisis Pregnancy Center, Bible Study Fellowship, English as a Second Language (ESL) and Citizenship Classes. The highlight of her teaching was traveling to China to teach ESL to University students. She also had a keen interest in arts and crafts: making clothes for her family, ceramics, Brazilian embroidery, crocheting, quilting, painting, china painting, calligraphy, etc., which she loved to share with her grandchildren and great-grandchildren. She was a "crafty grandma", lovingly referred to as Momo. Patricia's greatest heartache was being preceded in death by her son: James L. Elam. Her greatest joy was being surrounded by her ever-growing family, especially at holidays and celebrations. She is survived by her loving husband, Billy James Elam; three daughters: Susan (Rob) Mills, Karyn (Kerry) Kost, Patricia (Glenn) Barling; six grandchildren: Heather (Ben) Blackwell, Hailey (Derek) White, Shadrach (Rowan) MacDonald, AJ (Danise) Barling, Leatha (Justin) Hall, Hannah (Jonathan) Tedeschi; and 16 great-grandchildren. In lieu of flowers, the family suggests a tribute donation to: National Alzheimer's Association; PO Box 96011; Washington DC 20090-6011. Phone donations: 800.727.3900. Website donations: https://tinyurl.com/PattElam COVID restrictions prescribed a small service which was held in her honor on September 19, 2020, at Kennewick Baptist Church with Rev. Dustin Hall presiding. Patricia will be interred in Duncan, OK. The family would like to thank the caregivers at Home Health Solutions, Hospice House, WindSong Memory Care, and Nuclear Care Partners for their care and dedication to our parents.

Patricia Ann "Patt" Elam, 87, of Kennewick, WA, entered the loving presence of her Lord and Savior on September 11, 2020. Patt was comforted in her last days by her husband, Billy James Elam, and her loving family. She died of natural causes. Patricia... View Obituary & Service Information

The family of Patricia Elam created this Life Tributes page to make it easy to share your memories.