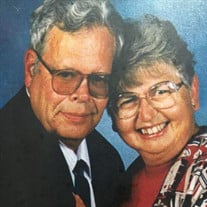 Norma Jean Page passed away at the age of 83 on January 3rd, 2021. She was born in Pasco, WA on April 24, 1937 to Mary E. and Ballance Richmond. She was married to the love of her life, Ernest Page, who passed away in 2009. They both passed away within hours of each other on the same day of the year, January 3rd. We like to think that she's moving on to be with Ernie. She had no siblings. She is survived by her two sons, Robert Page and Lansdon Page. Norma grew up on a wheat farm outside of Pasco, WA. Early in her life, they lived without all of the common amenities that we take for granted; power, running water, television. She would tell stories of growing up on the farm and how she was a tom-boy. Her mother had different ideas about how she should dress and act which didn't go over too well! As she got older, she learned to drive in wheat trucks and would eventually drive truck during harvest. One story that always stuck was how her father would go in town to rent a film reel and the neighbors (several miles away) would gather for movie nights with a reel-to-reel projector. She was a talented multi-instrumentalist including baritone and piano. Her mother wanted her to be a concert pianist, but again, Norma had different ideas! After finishing high school in a one room country school, she decided she wanted to branch out on her own and go to college. This was a strong theme with Norma. She was always ready to forge her own path forward instead of falling in line with the norm. This was apparent again as she went to college in the early 50's. She told stories of her experience in school and later in the workplace. She talked about how women were expected to be nurses or secretaries and required to wear skirts. Instead, she went for a bachelor's degree in geography with a minor in geology. She also joined the fencing team, but was not allowed to compete because she was a woman. It's women like Norma that pushed the ideas of women pursuing any career they want. She achieved her degree at Oregon State, where she met many life-long friends. After college, Norma worked for the Corps of Engineers in Walla Walla for several years. She was then offered a position at the United States Geological Survey in California. She moved to California to start up her new career. Working at the U.S.G.S., she met the love of her life, Ernie. They were soon married and starting a family! They adopted their first son, Lansdon, in 1972. In 1974, they adopted their 2nd son, Robert. Due to the rigorous requirements of adoption, she was forced to quit her career at U.S.G.S. in order for the 2nd adoption to be approved. Norma was a loving and dedicated mother and wife and remained so for the entirety of her life. Norma was well known for being very generous and caring. Every year at Christmas time she would send out about 100 cards to people. She would keep in contact with everyone and would send Birthday cards to people even if she hadn't heard from them for quite some time! She loved doing little things to brighten people's lives.

Norma Jean Page passed away at the age of 83 on January 3rd, 2021. She was born in Pasco, WA on April 24, 1937 to Mary E. and Ballance Richmond. She was married to the love of her life, Ernest Page, who passed away in 2009. They both passed... View Obituary & Service Information

The family of Norma Jean Page created this Life Tributes page to make it easy to share your memories.