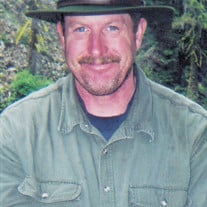 Kennewick, Washington. Michael (Mike) Schrag suddenly departed from this world on April 27, 2022 at his home in Kennewick, WA. He was 53. Mike was born in Everett Washington, six minutes before his twin sister Tracy, making him the middle child between her and older sister Kim. The three of them grew up in the Pacific NW before settling in the Tri-Cities where he graduated from Kamiakin High School. Mike joined the Marines shortly thereafter and served his country as a Mechanic in Desert Storm before being stationed in Okinawa, Japan. During his time in the Marines, Mike had his first son, Brandon, who tragically died before his first birthday. Mike returned to the Tri-Cities and began a 26-year long career with UPS. It was here that he had his son Tyler, of whom he was especially proud. Later in life, he met and married Tana and became a step-father to her children Miranda, Charlie, and Aaron. Mike loved being a dad. He lived to show kids, his own and others, how to chop wood, fish, play catch, and anything to do with camping and the outdoors. The majority of his vacations were spent camping, fishing, mushroom hunting, crabbing on the Oregon coast, and visiting his mom Caroline and stepfather Randy at their place in the mountains. Mike treasured being around family and loved attending and hosting family barbeques and get-togethers during the Holidays. He loved God and spent his free time going to church, studying the bible, improving his woodworking abilities, and taking care of his cherished yard. Mike was selfless with his many skills and spent more time helping others than working on his own home. He spent countless hours sharing his incredible craftsmanship to help with home remodel projects, repairing vehicles, showing off his chainsaw skills to cut down trees, and never hesitated to drop everything to help others with home emergencies. Mike was incredibly smart, patient, funny, strong-willed, and kind. He was a guiding light to his family and they are truly in the dark without him. Mike was preceded in death by his sister Tracy and is survived by his 4 children, parents Caroline and Randy, sister Kim, nieces Nikole and Victoria, nephews Sam and Michael, and his wife of 23 years, Tana. A Memorial service will be held at 1:00 PM Sunday, May 15th at: Hillview Baptist Church 1621 W 27th Ave Kennewick, WA 99337

Kennewick, Washington. Michael (Mike) Schrag suddenly departed from this world on April 27, 2022 at his home in Kennewick, WA. He was 53. Mike was born in Everett Washington, six minutes before his twin sister Tracy, making him the middle... View Obituary & Service Information

The family of Michael Terry Schrag created this Life Tributes page to make it easy to share your memories.