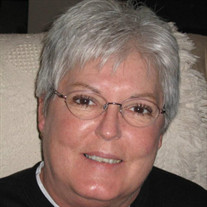 Mary Lynn (Milam) Anderson was born in Pasco, Washington at Our Lady of Lourdes Hospital June 7, 1953, a Sunday afternoon just the noon whistle was sounding. She was the youngest child of Arthur and Virginia Milam. Her siblings are Ben (deceased), Richard (deceased), David, John (deceased), and Anne. Mary Lynn’s father passed away when she was only 9 years old. Mary Lynn attended Pasco schools, Emerson Elementary, Stevens Junior High and was a proud member of the Pasco Bulldogs Class of 1971. She attended Columbia Basin College (CBC) and earned her two-year college degree. She couldn’t afford to complete her college education, so she joined the United States Air Force to receive the GI Bill. After basic training, she completed Technical School to be a law enforcement specialist and was assigned to McChord AFB in Tacoma. In August 1974, Mary Lynn needed a ride to work. Frederic (Andy) Anderson offered to give her a ride to work and exactly two months and one day later (October 20, 1974) she married Andy at the First Christian Church in Pasco. In January 1975, Mary Lynn and Andy were assigned to RAF Bentwaters in England for two years. Before they came home from England, Tammy Lynn was born at RAF Lakenheath. Once back in the States, they settled back in Pasco. In 1978 their son Michael John was born at Our Lady of Lourdes on a Sunday afternoon around noon. Mary Lynn was a great Mom, serving as a Room Mother for the kids in school and attending Central Washington University classes at CBC earning her bachelor’s degree. Mary Lynn went to work at Carondelet Counseling Center, working with the children and adolescents. Later she and Jamie Rundlaug open a private practice called Counseling Services of the Tri-Cities. Mary Lynn stayed there until 2001 when she was forced to retire for medical reasons. Mary Lynn did not stop, she supported both her husband and her kids in their endeavors. In 2015, Mary Lynn was the First Lady of the El Katif Shriners as Andy served as the Potentate. Mary Lynn and Andy celebrated their 47th wedding anniversary on October 20th. She had accepted Jesus as her savior as a young lady and was very comfortable with dying, knowing she would go to be with her savior, the Lord Jesus Christ. She passed away peacefully in her sleep on November 3rd. Mary Lynn is survived by her husband Andy, daughter Tammy Lynn and son Michael John. She also is survived by her grandkids, Emma, Abigail, Lucas and Amelia. She is also survived by her brother David and sister Anne along with numerous nieces and nephews. She will be greatly missed.

Mary Lynn (Milam) Anderson was born in Pasco, Washington at Our Lady of Lourdes Hospital June 7, 1953, a Sunday afternoon just the noon whistle was sounding. She was the youngest child of Arthur and Virginia Milam. Her siblings are Ben (deceased),... View Obituary & Service Information

The family of Mary Lynn Anderson created this Life Tributes page to make it easy to share your memories.

Mary Lynn (Milam) Anderson was born in Pasco, Washington at Our...