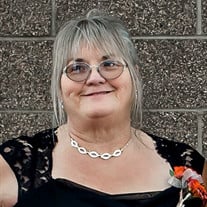 Margaret Darnell Schoenwald (Julson), caring mother, sister, and wife, passed away in the early hours of March 11, 2022 at her home in Kennewick, Washington. Darnell was the first child born to Margaret Darlene Winston and Paul Martin Julson, Jr. on September 28, 1955 in Kennewick. Growing up, you could often find Darnell riding horseback around the neighborhood; horses were her passion. The neighbors would joke about "the brown blur" of her on her beloved horse, Scamper. Darnell shared her love of horses with her younger sisters, teaching them how to ride and challenging them to try new things. She graduated from Kennewick High School in 1974 and went to Seattle shortly after to become a certified dog groomer. She came back to Kennewick and opened her own dog grooming business called DJ's Shaggy Dog, which she ran out of the back room of her rental house. For extra money, she worked nights as a cashier at Ron's Food Mart. One evening when Darnell was working at Ron's Food Mart, she met Timothy Schoenwald. Tim worked at a mechanic shop down the street from Ron's and started frequenting the convenience store more often just to see Darnell and chat with her. Tim finally convinced Darnell to go out on a date with him and they were inseparable after that. After dating for a couple years, Tim and Darnell got married on September 5, 1979 at Darnell's parent's farm in White Salmon, Washington. Tim and Darnell were blessed with three children: Teah Ann born in 1982, Evan Timothy born in 1985, and Ty Neal born in 1991. When Teah was still young, Darnell started the Bits & Bridles Horse 4-H club where she was able to continue teaching girls how to ride just like she taught her younger sisters. Darnell's love of animals was passed on to each of her children, as well, with Teah showing sheep and Evan and Ty showing pigs each year at the Benton-Franklin County Fair. Darnell eventually went on to take over as the leader of the boys' pig 4-H club. She was also very involved with volunteering in the community while her children were growing up. She helped organize an Easter Egg Hunt at the Finley Elementary School for many years, as well as a Santa House where children could pick out small gifts to give their parents for Christmas each year. Being a dependable person with a strong work ethic is something that was very important to Darnell and she worked hard to instill those values in her children as well. Darnell started working at the age of 16 and held a handful of different jobs throughout her life. Her first job in high school was at Toys Galore in the mall. After graduating, she worked for herself as a dog groomer for several years. She also worked at Ranch & Home as a cashier for about 12 years until she got a job at Finley Elementary School in 1993 as one of their night custodians. In 2010, Darnell picked up dog grooming again, joining her sister Shannan at Outwest Grooming in Prosser where she worked several days per week. She retired from both the school and the dog groomery in late 2020. When Darnell wasn't working, you could often find her at home busily working on her crafts. Darnell would spend hundreds of hours throughout the year making adorable Christmas décor such as santas, reindeers, and gnomes that she would sell at local holiday bazaars. It brought her a lot of joy to make her crafts and she enjoyed spending time with her family at the bazaars. Darnell showed her love for others by being the person you could always rely on, many would describe her as their rock. If you needed a ride to an appointment or even just needed something from the grocery store, she wouldn't hesitate to help you out. She never let anyone go hungry and would always make sure to cook your favorite dinners or desserts for birthdays, holidays, or whenever you asked. It was a rare occasion to leave Darnell's house without her sending you home with leftovers, especially when she would make a giant batch of her famous white spaghetti. Darnell was preceded in death by her parents but is survived by many family members including her husband, Tim; her daughter Teah; her sons Evan and Ty; her daughters-in-law Kymber and Ashley; her grandchildren Maggie, Wyatt, Landen, Sophia, and Malachi; and her sisters Denise, Shannan, Staci, and Tina. She will also be dearly missed by many friends and former coworkers. A memorial service will be held at First Christian Church, 1921 S. Olympia St in Kennewick, on Saturday, March 19 at 1:00 PM. Interment will be at Columbia River Cemetery in Pasco, Washington.

The family of Margaret Darnell Schoenwald created this Life Tributes page to make it easy to share your memories.