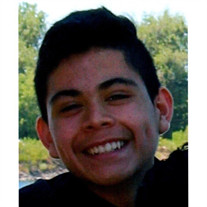 Manuel was born on April 21 of 2005, one of the last generations of Lourdes Pasco babies before they went extinct, like he used to say. He was a bright, kind soul. His innocence never left his eyes or his same, contagious smile. He never stopped being the dudy we all knew, no matter what age. We all thought he’d be the first to get into a good university or college, his love for math was what kept him going in school. Jumping up and down, during on his many daily walks, when they accepted his request to be in pre-cal. That was another thing he loved to do, walk all over Pasco. He didn’t even have a reason to, he just loved breathing in fresh air. Quick-witted and fast on his feet, you could throw any equation and he knew the answer. Dominoes, chess, sudoku, he was good at it all, he got that from his dad. Video games like Killer Instinct (spinal was his favorite character), Super Mario. Even games we’d make up in Ama’s carpeted living room, like Tom and Jerry where the goal was to get as much pretend cheese as we could. Running through the alleys of neighborhoods playing Hide & Seek Tag with the cousins. Nobody was saved from his playful pranks, on Christmas day he went up on the roof and stomped all over, “Miré un viejo feo gordo que tenía rojo”. Always trying to scare us by sneaking up from behind. I’ll never forget the sound of his laughter. You could be trapped in the darkest cave, and even just a single echo of his laughter could make the walls come crumbling down and the sunlight, hit your face. His presence was like a warm summer day, with a refreshing breeze, swaying back and forth on your favorite hammock. He brought a lot of worries, but what sticks is the countless memories and years we had of him. Now it’s time for his next journey, the soul never dies, and his is one of the brightest. God has a special place, for people like Manuel. His heart was too good for this world and its ignorant vipers that crossed his path, he cared about humans as much as animals, never walked in or left a room without petting the dog, and he always did research on whoever his cousins would hang out with to make sure we were in good hands. Surprise visits just to check up on us, to make sure he was there if we needed someone to talk to, always free of judgement. The most understanding person there could ever be. He left our hearts full of love and forever cherished special moments, locked within us and never forgotten. And the last piece we have of him, Lorenzo Rodriguez. “Yo lo venso todo.” Y vencio la vida, para ahora, caminar con Dios. IV.XXI.MMV.—I.VII.MMXXII

Manuel was born on April 21 of 2005, one of the last generations of Lourdes Pasco babies before they went extinct, like he used to say. He was a bright, kind soul. His innocence never left his eyes or his same, contagious smile. He never stopped... View Obituary & Service Information

The family of Manuel Rodriguez-Diodoro created this Life Tributes page to make it easy to share your memories.