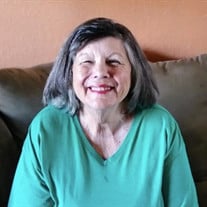 Linda Susan (Harvey) Lamberd (1949-2020) Linda Susan (Harvey) Lamberd is famously known to everyone for her infectious laugh, a love of sunflowers and an ear-to-ear smile. This amazing woman was born in West Covina, CA to Susan Ann and Floyd Harold Harvey on November 1, 1949. Her family is deeply saddened by her passing on Wednesday, November 25, 2020 in Kennewick, Washington. Linda was raised in California and made her trek to Kennewick, WA in 1964. She attended Kennewick High School and was a member of the class of 1967. On February 5, 1977, she married her true love, Darryl Lamberd at Kennewick First United Methodist Church. Over the years she worked at Pasco Meat Packers, Columbia Heating, and Kennewick First United Methodist Church and was co-owner of The Daisey Patch and The Victorian Rosette, but no occupation meant more to her than being a house wife and a mother of her two boys. Because of her deep devotion to her family and her love of children, she became actively involved with Sunday school, the Church youth group and Boy Scout troop #179. Linda is preceded in death by her mother, Susan Ann Harvey, her father Floyd Harold Harvey, her step-mother, Nita Harvey, her Father-In-Law Paul Lamberd and several aunts and uncles. She is survived by her husband of 43 wonderful years, Darryl Lamberd of Kennewick, WA, sons Shawn (June) Lamberd of Spokane, WA and Adam (Lacey) Lamberd of Richland, WA, her brothers Geoff (Penny) Harvey of Kennewick, WA and Ben (Sara) Harvey of Bellingham, WA, her grandchildren Roxana (Deandre) Brown, Katie (Daryl) DeFord, Skyler Lamberd, Parker Lamberd, Addyson Lamberd and Ayden Lamberd, her great-Granddaughter Reanna Brown, her Mother-In-Law Fern Lamberd and several cousins, nieces and nephews. In lieu of flowers please make donations, in her honor, to Kennewick First United Methodist Church. The family would like to extend our sincere thanks to the doctors and nursing staff of Kadlec Hospital.

The family of Linda S. Lamberd created this Life Tributes page to make it easy to share your memories.