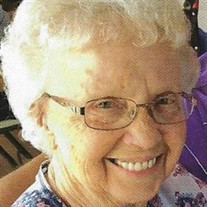 LaVerne L Bruce, age 86, passed away peacefully at Guardian Angels in Richland and was reunited with her husband and family in heaven. Her last days were spent surrounded by her family. LaVerne was born in 1934 to Dallas and Opal Long in Pomeroy, WA. She and her two sisters grew up in Dayton, WA. Growing up, she loved to be outside on the farm helping her dad, any chance she got! Her family also spent a lot of time camping in the Blue Mountains. LaVerne was chosen to represent her classmates at Evergreen Girls State in 1951. She was also the May Queen of Dayton High School in 1952. She married her high school sweetheart, Tommy Bruce in 1953 and were married 65 years. They settled in Pasco in 1961 where they raised their three children Pam, Kevin and Cindi. In 1975, they moved out to the farm where they were dryland wheat farmers off of the Kahlotus Highway. LaVerne was the head harvest cook, parts runner, wheat elevator attendant, CB base monitor (Dittio), and occasional wheat truck driver. She was the glue to the whole operation at the farm. LaVerne was the sole school bus driver for 25 years in the Star School District. She loved driving the children to school, taking them on field trips, and being an instructional aide in the one-room schoolhouse. All of her grandchildren all have fond memories with her on the farm baking cookies, helping with harvest, canning, cooking, and watching the moon come up over the hill on the porch swing. She could cook anything from scratch and many of her recipes are still family favorites. LaVerne loved hosting large family gatherings at the farm where special memories were always made and family traditions created. After retiring from the farm in 1999, they moved back into Pasco. Tom and LaVerne enjoyed their later years snowbirding in their fifth wheel to Arizona. She loved crafting, sewing, ceramics, quilting, baking, cooking, and listening to Gaither Homecoming music. LaVerne was a longtime member of Faith Assembly Christian Center in Pasco. She was a sweet, gentle soul with a beautiful, kind smile and a strong faith in God. LaVerne is survived by her three children: Pam Williamson, Kevin (Janee) Bruce, and Cindi (Ron) McDonald, along with 9 grandchildren and 15 great-grandchildren. A graveside service will be held at the Pomeroy cemetery on June 28th at 11:00. A celebration of life with family and friends will follow at the Pataha Flour Mill. The family invites you to sign the tribute wall at www.muellersfuneralhomes.com. In lieu of flowers, consider a donation to Chaplaincy Hospice. A special thanks to Guardian Angel homes and the Vineyard Home staff and Hospice for their care and support.

LaVerne L Bruce, age 86, passed away peacefully at Guardian Angels in Richland and was reunited with her husband and family in heaven. Her last days were spent surrounded by her family. LaVerne was born in 1934 to Dallas and Opal Long in Pomeroy,... View Obituary & Service Information

The family of LaVerne L Bruce created this Life Tributes page to make it easy to share your memories.