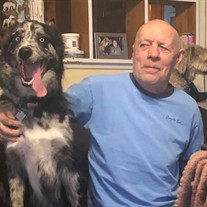 Larry Drake passed away on the morning of Saturday February 15th, 2020 at Kadlec Regional Medical Center in Richland, Washington with family by his side. He was known as a bull headed jokester, equally famous for his kind and charitable heart. Larry was born May 4th, 1958 and raised in Somers, MT where he had an early start being helpful and productive. When Larry was a few years old he was helpful by filling his mother's gas tank with a garden hose. When he was a little older, if you were in the outhouse, you may have found yourself stuck in there for a while calling for help, courtesy of Larry. As a young man, when walking home from Del's Bar, one of his cousins passed out under his mom and dad's apple tree. Larry was so concerned that he placed a pillow beneath his cousin's head, under that apple tree. Larry entered the Navy after graduating high school. It was while he was stationed in the Philippines that he met and fell in love with Fely Martinez. The two were soon married, moved to Pasco, WA, and had two beautiful daughters, Sarah (Sissy) and Lisa (Brat). Nothing made Larry happier or more proud than his family. Larry was a carpenter by trade and was also known as Mr. Fix Anything. Sometimes duct tape would be the best solution of course, if nothing else worked. He was a great ear and gave worthwhile advice. He always wanted to know "What do you need?", so he could help you. If money was tight at the time, it did not matter, Larry would find a way to help. Ten years ago, Larry was severely injured in a car accident which left him disabled. His ability to fish, hunt, and work were gone, but it could not dampen his humor. He would crack jokes at anyone who could throw one back at him. "If I can't make someone else's day, then what am I doing here?" We are all going to miss Larry's jokes and love. Larry was preceded in death by his mother, Irene Drake. He is survived by his wife of 42 years Fely Drake, Daughter Sarah Calvert, her spouse Jerry, grandson Elliott (El-C), Daughter Lisa Drake-Rogers, her souse Matt, Father Edwin Drake, Sister Denise O'Lear, Sister-in-Law Rainera Mozo. Along with that there are many aunts, uncles, cousins, nieces, nephews and friends that will miss him dearly. Please join his family at Mueller's Greenlee Funeral Home (1608 W Court Street Pasco, WA) for a viewing and Rosary Friday, February 21st, 2020 from 3:00pm - 7:00pm, Rosary will begin at 5:00pm. There will also be a celebration of life at the American Legion (1029 W Sylvester Street Pasco, WA) Saturday, February 22nd 2020 at 12:00pm, where you can come share memories and stories amongst all who had the pleasure to know Larry.

Larry Drake passed away on the morning of Saturday February 15th, 2020 at Kadlec Regional Medical Center in Richland, Washington with family by his side. He was known as a bull headed jokester, equally famous for his kind and charitable heart.... View Obituary & Service Information

The family of Larry Charles Drake created this Life Tributes page to make it easy to share your memories.

Larry Drake passed away on the morning of Saturday February 15th,...