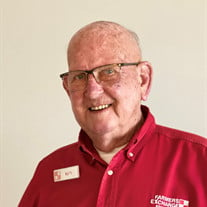 Kenneth B. Silliman 1931 - 2021 Kenneth Boyd (Ken) Silliman, the forth of four boys, was born to Mr. and Mrs. E. A. Silliman on November 10, 1931 at their home on the south side of the 200 Block of W. First Avenue in Kennewick, Washington. He passed away peacefully on the morning of Wednesday, February 17, 2021. Ken lived in Kennewick his whole life, never far from downtown where he worked at his place of business, the Farmers Exchange (FX). He attended Kennewick Grade School where he developed life-long friendships providing him many, many years of good times and great memories. In 1949 he graduated from Kennewick High. The "49ers" met for lunch the first Friday each month until Covid-19 brought those lunches to a stop. Ken attended college at Central Washington State College in Ellensburg in 1949/50 and then in November of 1950, during the Korean War, joined the U.S. Air Force. That decision led to the best moment in his life when he met his bride-to-be, Arleen Abelseth of Rapid City, South Dakota where he was based. He met Arleen at Barbara Ann's Ice Cream Parlor where she worked. She couldn't remember from one night to the next if he took cream in his coffee so he gave up and drank it black the rest of his life. They were married in the Methodist Church in Rapid City on August 23, 1953 and have celebrated 67 wonderful years of marriage. Ken and Arleen raised four children, Suzan, Vickie (Brian), Kathy deceased in 2016 (Gary), Keith (Lisa), and have ten grandchildren and nine greatgrandchildren. After their wedding, Ken and Arleen moved back to Kennewick where Ken joined his Dad and brother Clint in running the family business, the Farmers Exchange. Eventually, Ken became the sole owner of the Store and subsequently sold it to his son, Keith in 1997. Ken loved working at the store which he did until 2021. He loved running his business, but mostly he loved his customers. Ken was awarded the very first "Downtowner of the Year" award in 1989. He served as President of both the Downtown Association and the East Benton County Historical Society and was named the Kennewick Man of the Year in 1991. Ken, an avid Husky fan, could be seen driving his silver pick-up with the purple W's on the doors. He was a season ticket holder for many years and one year even made it to all the home and away games. The three most important things in his life, however, were his family, the FX and downtown Kennewick. Ken is survived by his wife Arleen, daughters Suzan and Vickie, and son Keith. He is preceded in death by his parents Mr. and Mrs. E. A. Silliman, brothers Roy, Clint and Glenn, daughter Kathy and nephew Richard (Dick) Silliman. Services for family only will be held at Mueller's Chapel of the Falls in Kennewick. In lieu of flowers, please send any donation to the East Benton County Historical Society at P. O. Box 6964, Kennewick, Washington, 99336.

The family of Kenneth B Silliman created this Life Tributes page to make it easy to share your memories.