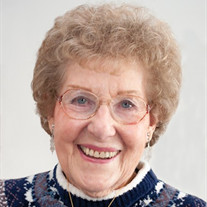 June Pearl Blankenship was taken into the arms of her savior on February 18, 2020 after suffering a stroke on Christmas morning. She was born on June 27, 1929 in Milton-Freewater, OR as the oldest of four daughters of Walter and Wilma Cary. After graduating from Mac Hi, she married Bane Blankenship and moved to the Tri-Cities in 1947, where Bane was employed at Hanford and June was a homemaker. It was difficult being a homemaker at Camp Hanford when the wind would blow dust so badly that the small trailer had to be cleaned several times a day and laundry often had to be washed multiple times. June and Bane were married for 67 years, during which time they saw many changes in both their lives and the Tri-Cities. June raised four children, Terry (Teresa), Rick (Meg), Greg and Dixie, who were all present during her journey from the hospital after her stroke to her passing at Fleur de' Lis in Kennewick. God and her family were the center of June's life. June and Bane were one of the five families that started a small Church of God in Kennewick which has grown to be C3 Church on Gage Blvd. June started teaching a young singles bible study when she was a young adult herself and continued teaching until she was 90. Over the years the group grew from a few people to over 100 seniors. She tried to retire from teaching the group several times, but the group would always talk her into continuing. June loved travel and the many trips she took, camping, fishing, gardening and playing table games. Not one ball game, piano recital, swim meet, band recital or other event that her children or grandchildren participated in went by without June sitting in the stands. Some of the double-headers or swim meets lasted 8 hours, but she never left. She taught all her children to read music, play the piano, table manners and respect for others; but most of all, she taught her children to love God. Not one swear word was ever heard in her house (maybe a few were mumbled under her children's breath) and there was prayer at every meal. June was not a stern disciplinarian, anticipating that guilt and respect for God would correct bad behavior. June baked the most delicious cakes, pies and cookies. Her house always had a full cookie jar and other goodies, which was the reason her children's friends always found a reason to stop by for a snack. Over the years her baking became famous and if June didn't bring a plate full of cookies or other goodies to family or church events, some considered the event to not be a success. As her children grew and more independent, June became an Avon Lady and had a very successful career for over 30 years. She loved the personal interaction with her customers. The remarkable thing about becoming an Avon Lady is that June had a very strict mother that wouldn't allow her girls to wear makeup. In fact, she never wore makeup until becoming an Avon Lady. Everyone was a little amazed that she would have the guts to defy her mother's wishes. What was even more amazing is that after she became an Avon Lady, her mother decided makeup was ok and became one of June's customers, as did her three sisters. June would want to be remembered as a humble person who tried her best to follow God's path throughout her life. Those who knew her would agree that she did just that. June was preceded in death by her husband Bane, sister Donna, grandson Justin and great granddaughter Isabel. In addition to her four children she is survived by sisters Sharon Hall and Patricia Huffman; grandchildren DeeDee Warren (Mike), Eric Blankenship (Genoa), Mark Blankenship (Jessica), Alison Eldred (Brian), Stephanie Livingston, Sarah Chung (Danny); great grandchildren Ben Blankenship, Berit Blankenship, Cannon Blankenship, Morgan Eldred, Katie Dilworth, Braden White, Nathanael Chung and Addison Chung and many nieces and nephews. A Celebration of Life service with a reception to follow will be held at C3 Church on Friday, March 6th at 11:00 am.

June Pearl Blankenship was taken into the arms of her savior on February 18, 2020 after suffering a stroke on Christmas morning. She was born on June 27, 1929 in Milton-Freewater, OR as the oldest of four daughters of Walter and Wilma Cary. After... View Obituary & Service Information

The family of June Pearl Blankenship created this Life Tributes page to make it easy to share your memories.

June Pearl Blankenship was taken into the arms of her savior...