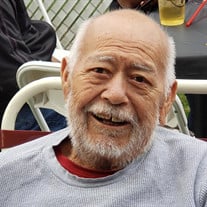 Jose Antonio (Tony) Caballero, 80, of Kennewick, WA died on November 3rd, 2019 after a long illness. He was surrounded by his entire family at the time of his death. Tony was born on December 17th, 1938 in Durango, Durango, Mexico to Francisco Caballero and Guadalupe Caballero Lopez. His parents gave birth to 11 children, but only 3 survived. He was the youngest of the children. Tony's father died when he was 9 months old and his mother died when he was 9 years old. He was raised by his sister Francisca and various uncles until he was 13 years old. He attended school through 3rd grade, but had to quit to work to help earn his keep. At the age of 13, he made his way north to the United States. He met and married his wife, Esperanza Garza, in 1957. They worked as migrant farm workers and welcomed 6 children into their lives; Marta (1959), Jose Antonio Jr. (1960), Emma (1961), Jose (Joe) Alfredo (1962), Raquel (Rachel) (1967), and Cristo (1979). They decided to settle in Washington when it was time for their children to start school. Tony continued to work as a farmworker and truck driver, while teaching himself to read and write in English. He studied and passed his U.S. citizenship test, becoming a naturalized citizen in 1970. Tony worked at the Hanford Nuclear Reservation for 23 years as a Teamster bus driver until his retirement in 1996. He loved fishing, gardening, dancing, and camping. In his later years with his wife, he loved spending time with their grandchildren and would always take them camping and fishing. Tony is survived by his wife of 62 years, Esperanza, 5 children, 10 grandchildren, 10 great-grandchildren (plus 2 more on the way), 1 great-great granddaughter, and several nieces and nephews. He is preceded in death by his parents, his sister and brother, and his son Jose Antonio Jr. He will be greatly missed by family, friends, and those whose lives he has touched. Viewing and Rosary will be at Mueller's Tri-Cities Funeral Home at 1401 S. Union St. Kennewick, WA on Friday, November 8th, 2019 from 4- 8:00pm. Rosary will also be during this time from 6:00-6:30pm. A Funeral mass will be held at St. Joseph's Church (big church) on Saturday, November 9th, 2019 at 10:00am. Following graveside services at Desert Lawn Memorial Park on 10th Avenue and Union, a reception will be held in the upstairs meeting room of the St. Joseph's Parish Office.

Jose Antonio (Tony) Caballero, 80, of Kennewick, WA died on November 3rd, 2019 after a long illness. He was surrounded by his entire family at the time of his death. Tony was born on December 17th, 1938 in Durango, Durango, Mexico to Francisco... View Obituary & Service Information

The family of Jose A. Caballero created this Life Tributes page to make it easy to share your memories.