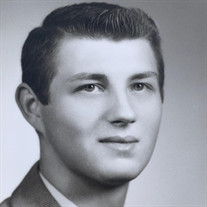 John Theodore Niezgoda, Jr., age 81, of Kennewick, Washington, passed away peacefully on June 27, 2020 with family by his side. John is survived by his devoted wife of 55 years, Harriet Niezgoda (Wilcox); six children and their spouses, Jay and Marcia Niezgoda, Ray Niezgoda, Juanita and Larry Roberson, Ruby Ochoa, Jennene and Mark Pfannenstiel, Julia and Steve Peak; eight grandchildren, Marlina, Sara, Kayla, Alyssa, Renee, Jordan, Ellie and Averie; five great grandchildren, Hailey, Oren, Sovereign, Mirabella and Jonathan; as well as his sister, Theresa Niezgoda. He was preceded in death by his brother, Jess Niezgoda; granddaughter, Melissa Hodson; and grandson, Jonathan Pfannenstiel. John was born on August 11, 1938 to John and Etta Niezgoda (Redsell) in Portland, Oregon. After graduating from Franklin High School in 1956, John served in the U.S. Air Force before embarking upon a 30-year career as a land-surveyor, earning multiple distinguished service awards from the U.S. Corps of Engineers. John had a love of classic cars and owned several Cadillacs and El Caminos over the years. John was a true family man and he would humbly tell you that his greatest blessings were his devoted wife, loving children and extended family, including loved ones he readily embraced as his own daughters, Terry Fleischman and Christina Dunham. John purposefully dedicated his best self and time to caring for his beloved Harriet. Together they created their greatest life achievement, a family strongly influenced by his patriarchal values of respect, integrity, honesty, and quality work ethic, peppered with a voracious appreciation for life's blessings and the importance of selflessly paying them forward. Many envy his admirable legacy as he is fondly remembered by family and friends as a devoted husband, loving father and grandfather. He was also known and adored as GRANDPA GREAT, the creator of silly words and crooner of "You are my Sunshine." Private family services will be held. Online condolences can be left on the John Theodore Niezgoda, Jr. guest book at www.muellersfuneralhomes.com . True to John's legacy of caring for his family even in death, he would ask that memorial donations be made to in honor of the recent passing of his grandson and namesake, Jonathan Pfannenstiel.

John Theodore Niezgoda, Jr., age 81, of Kennewick, Washington, passed away peacefully on June 27, 2020 with family by his side. John is survived by his devoted wife of 55 years, Harriet Niezgoda (Wilcox); six children and their spouses, Jay... View Obituary & Service Information

The family of John Theodore Niezgoda Jr. created this Life Tributes page to make it easy to share your memories.