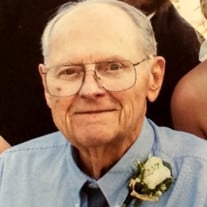 On Sunday, October 25, 2020, John T. Bettinson Jr., known to many as "Big John," passed away at the age of 88. John was born on July 31, 1932 in Prosser, Washington to John T. (Tom) and Doris A. Bettinson. Being raised in Prosser, he attended Prosser High School where he was a member of the football and baseball teams, pitching a no-hitter his Junior year against Kennewick High School in 1949. After graduating, John attended Washington State University, leaving after a few short years to join the U.S. Army. John was a veteran of the Korean War and was involved in "Operation Castle," which performed testing of the hydrogen bomb in the South Pacific in 1954. After serving his time in the Army, John returned to Prosser where he met the love of his life, Carolyn. They were married in August of 1955. John worked for General Electric as a Radiation Monitor on the Hanford site, where he worked until 1965. In 1966, John followed his passion of coin collecting and opened The Coin Cradle, Inc. which he operated until 1994. John was quite the entrepreneur. He went on to open Best Bett Cards and Comics with his son later that year, and in 1997 he and his wife Carolyn opened Cookies By Design. In 2015, at the age of 83, John finally retired with the closure of the cookie store. John had a passion for sports, especially baseball and football, which he passed down to his three sons; Steve, Ken, and Mike. He spent many years on the field with them as their assistant baseball coach. In the late 1960's John was instrumental in revitalizing the Kennewick Grid Kids program through his leadership as President of the program and fund-raising efforts. In his later years, John enjoyed watching the Mariners, rarely missing a game! John is survived by his wife of 65 years, Carolyn, his three sons, Steve (Monique) of Kennewick, Ken (Sue) of Boise, and Mike (Rene) of Spokane, his eight grandchildren, Ashley (Brad) Partlow, Bo, Chad, Derek (Ashley), Dylan, Hayden, Amanda, Nick and three great-grandchildren, Paetynn, Kamdynn, and Adilee. Services will be held at a later date in Spring 2021.

The family of John Thomas Bettinson Jr. created this Life Tributes page to make it easy to share your memories.