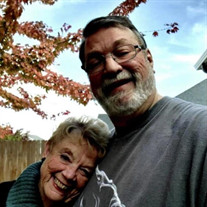 When Jerry Decker's name came up on God's roll call on March17th, Jerry wasn't home. He was in one of his favorite places, behind the wheel of his beloved black Chevy truck with the motor running in the parking lot of the cardiologist's office. He didn't get a chance to say, "Nope, can't go right now. I've more stuff I'd love to do--more wood to turn, more good food to eat, more wine to drink and more time to tell friends how much I love and admire them. I need to tell them how much a part of my life they have been, what fun and good times we've had and what a wonderful life I've had because of them." Jerry was born in Berkeley, California, in 1947 an appropriate start to his rabble-rousing lifetime. Within a short period of time two more brothers joined in the fun--Christopher (the middle brother although he didn't know it at the time), and David (the baby) which the first two arrivals determined was to be ignored until he reached trouble-making age. That's when the fun really got started. Dad delivered eggs for a living and Mom worked at See's Candy, which seemed a dream job to her children until they had eaten so many chocolate covered cherries the very smell of them turned their faces a paler shade of green. A talking to from Dad, when you chased your brother with the cast iron skillet intent on killing him, football games, camping with Grandma and your brothers in the Buick, lots of fun with your brother's from another mother Russ Newman and John Etheridge. Taking your Mom to work in your first car that had a lawn chair with cut-off legs behind the steering wheel, instead of a car seat. The military came calling after high school. Jerry decided he wanted to get ahead of the game and rather than be drafted, he enlisted in the U.S. Air Force and served from 1966 to 1970. After his initial training he was sent to Vietnam, where he served two tours of duty as a jet and helicopter mechanic. He flew as part of the crew on air rescue missions. This was a part of his military service that left a lasting mark on his heart and life. When he returned home a skinny boy forever changed by the war, he needed time to recover. Eventually he decided that going to college was the right course of action. And that's when he met Judie on a blind date. Judie fell in "like" immediately. After all, he was 6'2", blond, and had a sports car. Judie didn't consider herself any of those girly equivalents. Nobody cared. They were in love and married in July 1974. The bride and all her girlfriends cried, as none of them ever thought it would happen (nor did Judie's Dad who could finally take down the sign announcing the availability of his oldest daughter.) Jerry and Judie were married for nearly 49 years and were best friends and partners. Two hearts forever welded together with love. Jerry's first and only job after college was with Hewlett-Packard. He loved it. He was there for the invention of the "personal computer." It was a wild and exciting ride. He held lots of different jobs over the 30 plus years that he worked for H.P. He managed manufacturing lines and different departments within the company, eventually landing in sales and marketing as a National Sales Manager. He traveled the world and because he met so many interesting people, he always had stories to tell. Throughout his lifetime Jerry experimented with many hobbies, always searching for the right one. On our first anniversary, he surprised me with a framed embroidered outdoor scene. I asked him, "Who made this?" He replied, to my shock and surprise, "I did." Turns out not only did his Grandma Mary teach him how to play a mean game of poker and eat any strange vegetable she put on his plate, she also taught him how to embroider and to love the library and books. She was a stellar influence in his life. In his search for the right hobby, Jerry eventually found wood turning, the second love of his life. Fortunately, she didn't want to marry him; she only wanted to keep him entertained in his retirement. It was a match made in Heaven, and he became an expert at it. He loved to teach the craft and was president of wood turning clubs in both California and the Tri-Cities. He made life long friends that I know will miss him. They will miss his willingness to volunteer, to sharpen their tools and to share his knowledge of turning. They were good and valued friends. It has been a wonderful life filled with love, laughter and good times. No regrets. Everyone should be so lucky. A celebration of Jerry's happy life and the date it will be held will be announced to family and friends shortly. Arrangements are being handled by Mueller's Tri-Cities Funeral Home.

When Jerry Decker's name came up on God's roll call on March17th, Jerry wasn't home. He was in one of his favorite places, behind the wheel of his beloved black Chevy truck with the motor running in the parking lot of the cardiologist's office.... View Obituary & Service Information

The family of Jerry E Decker created this Life Tributes page to make it easy to share your memories.