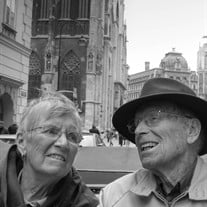 Janice Ruth (Tugby) Dorman returned to the loving embrace of her heavenly Father on Tuesday, March 2nd at age 90 after a series of strokes. She was a woman of strength and faith, and leaves behind her beloved husband Kenneth and a large and loving family. Jan's journey started in Tacoma, WA in 1931 with her parents, Ernest Eric Tugby and Ruth Billings Tugby. Her father was an electrical engineer and the family moved several times, from Tacoma to Berkeley CA in 1935, to Utah during World War II, then back to California after the war ended. Jan was an energetic leader from a young age, active in both Girl Scouts and student government. She graduated early from Herbert Hoover High School in Glendale, CA in 1948. A stint as a roller-skating carhop gave Jan the desire to study Hotel and Restaurant administration, so she traveled by train from California to Pullman in 1949 to attend Washington State College (later WSU). As a coed she pledged Alpha Gamma Delta where she met life-long friends. Jan met Ken Dorman in an English class at WSC when he asked to see her class notes. They were married in 1950 in Glendale and moved to Lacrosse, WA after Ken completed his studies at WSC. In 1956 Ken and Jan moved to Ironwood Road in Block 19, north of Pasco. In time, their family expanded to six children, all who survive her: Richard (Denise) Dorman, David (Debora) Dorman, Marji (Dave) Winckler; Susan (Charles) Lindsey; Barbara (Paul) DeMaris, and Trish (Jim) Harder. While raising a family and farming with Ken, Jan's vitality found a home in local organizations: PTA; Farm Bureau; Washington Federation of Republican Women; Church of our Savior (Pasco); St. Stephen's Ministry; All Saints Episcopal Church (Richland); Bible Study Fellowship; and Central United Protestant Church. As a Girl Scout leader, she introduced many girls to "s'mores" and camp songs in backyard cookouts. She also ran the Glade Café at Merrill's Corner for several years, where she enjoyed visiting with regulars while frying her famous "Glade burgers." Jan ran as a Republican candidate for Washington's 16th House District seat in 1976; although she lost the race, she loved the experience of running for office. Once retired, Jan traveled with Ken to England, her father's birthplace, where she met distant cousins on the Isle of Wight. Jan and Ken visited Hawaii, cruised the Danube river in Europe, and enjoyed driving vacations to the Canadian Rockies and the Oregon coast. At least twice they transported vehicles for their grandchildren, from Maryland and Arizona to Washington, and enjoyed many adventures along the way Jan's life was defined by her love of Christ and family. She would often marvel at how she encountered God's grace at every twist and turn in her life, and she was faithful in prayer. Jan loved to bring forth the latent beauty in the simplest things, from flowers to people. In addition to her children, she is survived by her loving husband Kenneth, sister Dee (Marty) Freeman of Olympia, WA, 23 grandchildren and 24 great-grandchildren. The family wishes to thank the staff at Parkview Estates and Kasey Coquillette for their assistance to Ken in caring for Jan these past two years. A private family memorial service will be held at a later date. Memorials in her memory may be made to the Franklin County Historical Society and Museum. Mueller's Funeral Home is in charge of arrangements. Please visit Jan's obituary at https://www.muellersfuneralhomes.com/obituaries/

Janice Ruth (Tugby) Dorman returned to the loving embrace of her heavenly Father on Tuesday, March 2nd at age 90 after a series of strokes. She was a woman of strength and faith, and leaves behind her beloved husband Kenneth and a large and... View Obituary & Service Information

The family of Janice Ruth Dorman created this Life Tributes page to make it easy to share your memories.

Janice Ruth (Tugby) Dorman returned to the loving embrace of...