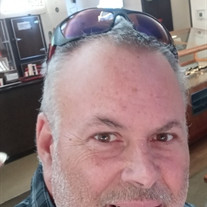 James Spencer Harris, AKA Jimmy, AKA Jim Jim, or Poppy, age 55, went to be with Jesus on Thursday, September 30th, at 10:25am at Kadlec Regional Hospital. Jim Jim was born May 7, 1966 in Spokane, Washington. He moved to Benton City with father, Big Jim Harris, until he graduated high school. He then moved to Seattle, Washington with older sister, Julie Ridding. After some time, he decided to go back to the Tri-City area and build his life there. Jim Jim owned a landscaping business before opening The Sub Factory in Richland in 1990. After marrying Laurie Harris, they moved to Redding, California and opened Jaimitos Tacos in 2014. Jim Jim enjoyed cooking, especially for others. He had such a gift for it. Anything you wanted from scratch, and it was always AMAZING! Jim and Laurie Harris moved back to the Tri-Cities area in 2017 to start over. Jim Jim could fix, build, or create anything that came to mind. He was also such an outdoorsman who LOVED camping and taking his grandson's out to ride quads and do "man things." Safety was always #1 when it came to the boys. There wasn't anything Jim Jim couldn't do or accomplish! He absolutely LOVED growing palm trees, banana trees, and pretty much anything. His love for his wife, Laurie Harris, was truly amazing to watch. Jim Jim is survived by parents, David and Ellen Gray, and father James P. Harris; wife, Laurie Harris; daughter, Britni Purser; grandchildren, Kingston Miller, and Hendrix Purser; sons, Justin, Aaron, and Ryan Henning, as well as Gloria Tyler Baker; siblings, Julie and Duane Ridding, Shari and Jeff Rahman, and Charles and Rebecca Gray; cousins, Eric and Peter Gunstone; and in-laws, Robert Boggan and Marilyn Purser-Boggan. The family will be holding a Celebration of Life, October 16, 2021 at 11:00am, for Jim Jim at Mueller's Tri-Cities Funeral Home. The address is 1401 South Union St. Kennewick, Washington 99338.

James Spencer Harris, AKA Jimmy, AKA Jim Jim, or Poppy, age 55, went to be with Jesus on Thursday, September 30th, at 10:25am at Kadlec Regional Hospital. Jim Jim was born May 7, 1966 in Spokane, Washington. He moved to Benton City with father,... View Obituary & Service Information

The family of James S Harris created this Life Tributes page to make it easy to share your memories.