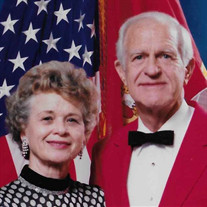 LaRee C. Rasmussen 12/3/1925--6/15/2020 Jack J.Rasmussen 8/19/1923--6/27/2020 LaRee was born in Central, near Richfield UT, the youngest of three daughters born to Parley and Iona Shelton Christensen. Jack was born in Monticello UT, raised in Ephraim UT, the sixth of nine children born to John "Jack" and Bertha Colby Rasmussen. Both were blessed with close-knit, loving families that knew sorrow early, as LaRee's father died when she was seventeen, and Jack's father died when Jack was only thirteen. After high school, Jack helped his older brother Thad run a cafe in Delta Utah. Everything changed Dec. 7 when Pearl Harbor was bombed. Jack went to the recruiter the next day and in January '42 started 4 years' service in the 3rd Division of the Marine Corps. He was in the first group of Marines ever trained at Camp Pendleton. Jack was involved in military action on the islands of Bougainville, Guadalcanal, and the battles of Guam and Iwo Jima, where he was wounded. He finished his tour of duty as a Drill Instructor back at Camp Pendleton. Jack was a devoted patriot and very active in the Marine Corps League in Spokane. He spoke before audiences at schools and church. Meanwhile, LaRee finished high school and attended 1 year at University of Utah. Her cousins from Ephraim introduced her to the handsome Marine. They courted and finally married on September 1, 1948. As a result of her writing a winning essay, Jack and LaRee were married on a radio show in Hollywood, got gifts and a dream honeymoon. Jack finished his degree in Soil Science at Utah State and started work in Bellingham WA for the Soil Conservation Service, which was part of USDA in 1949. Daughter Terese and son Thad were born in Bellingham. Sorrow struck again, when newborn Thad was severely brain-damaged by RH blood incompatibility a few days after birth. Despite many hospitalizations, he lived almost 3 years. Jack's work took him to Prosser, Toppenish and finally a big promotion to Spokane. He completed soil surveys of Whatcom, Benton, and Yakima Counties. LaRee resumed her college studies while in Prosser, earning an AA from Columbia Basin College. Persevering on, she earned a BA and MA in Education and English. She was a Reading Specialist in Spokane schools. Education was very important, so they established the Rasmussen Scholarship at Snow College in Ephraim Utah. The first scholarship awards were given in Fall 2019 and will continue in perpetuity. Jack and LaRee were life-long members of the Church of Jesus Christ of Latter-day Saints and Jack held leadership positions in Sunday School and over the Young Men's organization. In 1971, they were sealed together for eternity with their children in the Manti Utah temple. The couple loved to travel. They went to Hawaii every year in their retirement. They toured Europe twice, and went on many cruises. They trained hard for the Bloomsday races in Spokane every year. Both earned medals for being in the top 3 finishers of their age groups. In 2011 due to LaRee's increasing forgetfulness, Jack decided to move down the street to Touchmark Senior Living. They enjoyed many activities and freedom from housework there. This April, Terese was finally able to move her parents to the Tri-Cities. They are survived by daughter Terese and son-in-law Roger Pratt, grandchildren Jonathan (Julie) Pratt and Jennifer (Richard) Pruiett of Kennewick, Rachel (David) Ritchey of San Jose CA, Kristen (Carlos) Canalessi of Sandy Utah; grandchildren Sarah and Sam Pratt, Michael and Amilyn Pruiett, and Cielo, Rey, and Jack Canalessi. Also, sister-in-law Chloe Rasmussen and many loving nieces and nephews. Predeceased by son Thad, LaRee's sisters Barbara and Donna Vee, Jack's siblings, Thaddeus, Thora, unnamed baby boy, Beth, Lois, R.V., Charles Ned, and Nona. Burial was at Mueller's Desert Lawn Cemetery in Kennewick WA with military honors for Jack.

The family of Jack Rasmussen created this Life Tributes page to make it easy to share your memories.