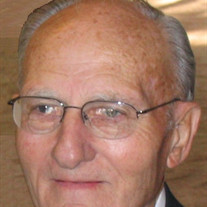 Hubert, age 98, went to be with the Lord on January 12, 2022, after passing away due to natural causes. He was born in 1923 to Roy and Ruby Sales on their small farm near Prague, Oklahoma. One of his first memories was sitting at his mother's feet as she picked cotton, their family's cash crop. The annual cotton harvest of two bales ($100), a large garden, and their milk cows helped them survive the hard times. In his growing-up years he experienced the Great Depression, the Dust Bowl storms, the Oklahoma oil boom, primitive medicine, and rural electrification. After high school his college plans were disrupted by the bombing of Pearl Harbor and he was drafted to serve in the Army's 552nd Anti-Aircraft Battalion. On February 12, 1944, he departed New York City aboard the Queen Mary for Scotland, and on June 14 he landed on Utah beach, Normandy, France, with the D-day invasions. He fought in the war campaigns of Normandy, Northern France, Ardennes, Rhineland and Central Europe, including the Battle of the Bulge. His outfit was one of the first to cross into Germany, over the Rhine River at Remagen. After the war, he joined his parents in Stanfield, Oregon. Beginning in 1947, Hubert had a 32-year career with the US Army Corp of Engineers, as a surveyor, powerhouse operator, and construction manager. He helped build both McNary and John Day dams and various other Corp projects on the Columbia and Snake rivers. He worked nine additional years for J.A. Jones, Hanford, as a contract administrator. In 1954, Hubert married Velma Fae Bennett, in Hermiston, Oregon; three children soon followed. He was a faithful husband and father and a generous friend. Hubert accepted Christ as a young man and demonstrated his faith by his actions. His favorite Bible topic was prophecy. He and Velma were members of South Hills Church for over 40 years. Hubert and Velma enjoyed visiting their children, playing with the grandkids, and vacationing with friends. However, Hubert most enjoyed being home. Hubert had an inquisitive mind, a fantastic memory, a fondness for mental math, and was well-read. He enjoyed woodworking projects; wooden toys, puzzles, slab clocks, trivets, and, later, clothes-pin chairs. He also kept busy fixing and tinkering with machinery, whether it be the washing machine or car. His culinary pursuits included kolaches, Christmas candy, bean soup, and cinnamon bread. But his garden was one of his greatest joys and was almost a full-time occupation in retirement. He always raised more fruit and vegetables than Velma could can or freeze, so there was plenty to share with friends, senior facilities, and the Union Gospel Mission. Hubert joins his parents, Roy and Ruby; sisters, Inez Higginbotham (Therman) and Martha Sales, and wife, Velma, in heaven. He is survived by his children, Cindy Garber (David), Randy Sales, John Sales (Susan), and four grandchildren; Rachael Abrott (Tim), Troy Sales, Mark Garber, and Julianne Garber. A memorial service will be held at 10:30 am., Friday, January 21, at Mueller's Tri-Cities Funeral Home, Kennewick.

Hubert, age 98, went to be with the Lord on January 12, 2022, after passing away due to natural causes. He was born in 1923 to Roy and Ruby Sales on their small farm near Prague, Oklahoma. One of his first memories was sitting at his mother's... View Obituary & Service Information

The family of Hubert Sales created this Life Tributes page to make it easy to share your memories.