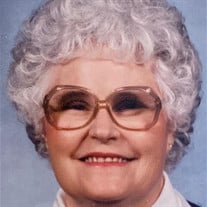 Helen Wilson Buescher, 91, of Kennewick, Washington, passed away on Thursday, December 24, 2020. Helen was born to Joseph and Effie Wilson on January 21, 1929, in Wheatridge, Colorado. She was the youngest of seven children. Helen graduated from high school and shortly after moved to Richland, Washington, to live with her sister and brother-in-law. She met Charles Louis Buescher, and they married on October 8, 1949. They were married for almost 64 years when Charles passed in September 2013. Helen and Charles had three sons: Charles, Howard, and James. Helen worked as a secretary at Hanford before she was married and later when her children were older. Helen loved collecting antiques, desert rose dishes and glassware. She also dabbled in oil painting from time to time. Helen and Charles had a vacation home in Packwood which provided her the opportunity to further her antique collection. She enjoyed her pet dogs and shared many fond memories of them. She loved her church and has been a member of Saint Joseph's Catholic Church since 1956. Helen will be remembered for her love of family, friends, and her faith. She could talk for hours about her children and grandchildren and their many accomplishments. Helen was preceded in death by her parents, Effie and Joseph Wilson; husband, Charles Louis; brothers Howard, John, James Orval and Fredrick; and sisters Elsie Prather, and Virginia Northrup. She is survived by sons Charles (Susan) of Ammon, Idaho; Howard of Kennewick; James (Connie) of Moses Lake; five grandchildren: Candice (Chris Dyreson), Brandice (Will Gannon), Joshua (Karrie), Jonathon (Cristal), and Brooke (Scott Stosich); 6 great-grandchildren, and numerous nieces and nephews.

Helen Wilson Buescher, 91, of Kennewick, Washington, passed away on Thursday, December 24, 2020. Helen was born to Joseph and Effie Wilson on January 21, 1929, in Wheatridge, Colorado. She was the youngest of seven children. Helen graduated... View Obituary & Service Information

The family of Helen W Buescher created this Life Tributes page to make it easy to share your memories.