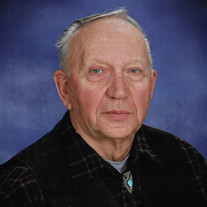 Gordon Herman Hasbargen September 11, 1939 - January 28, 2021 Gordon Herman Hasbargen was born September 11, 1939 in Baudette, Minnesota to Herman and Mayme (Arola) Hasbargen. He passed away January 28, 2021 in Richland, Washington. Gordon served in the United States Army and after an honorable discharge joined the Army Reserves. Farming was his passion and he farmed in the Pasco and Eltopia area for the majority of his adult life. During his retirement, he also owned and managed mini-storage units. Family was important to him and he loved spending time with them. He loved the outdoors, hunting, fishing, camping and spending time in the mountains. Gordon loved God, his family and willingly, supported the Lord's work locally and globally. He spent his life in service of God and his family. He was an active member of Southridge Church in Kennewick, Washington (aka King of Kings) where he volunteered in numerous ways. He was respected and loved by all and will be greatly missed. Gordon was preceded in death by his parents, Herman and Mayme Hasbargen; by his brothers Verlyn and Don Hasbargen; by his sisters Grace Ricks, Mavis Buck and Clara Starbuck; and by his daughter Lenora Hasbargen. He is survived by his wife, Lilly Hasbargen, his daughters Theresa Hasbargen and Charlotte Morgan; his step-son Bob Hasbargen; his grandchildren, Denise Hasbargen, Kayla French, Kelly Morgan, and Joshua Morgan; and his great grandchildren Ryker, Brody and Liam French, Jacob, Eric, Theodore, Drake, Logan, and Lawryn Hasbargen.

The family of Gordon H. Hasbargen created this Life Tributes page to make it easy to share your memories.