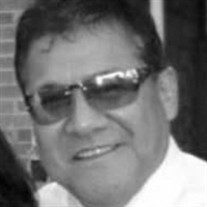 Francisco Jalomo Vargas, 66, passed away on December 15th, 2021, with loved ones by his side. He was born on January 24th, 1955, in Toppenish, WA to Felix and Santos Vargas. He is survived by his Mother Santos Vargas, brothers Felix Vargas (Loretta), Antonio Vargas (Mari), Fidencio Vargas (Nina), sisters Paula Rieger (Jim), Maria Espinosa, Janie Brim, Santos Scott, Lupe Montelongo (Albert) and Uncle to many nieces and nephews. He is also survived by his wife and soulmate Estella Vargas, loved by his children; Jesenia Vargas, Charie White, Vanessa Torres (his #1 son-in-law Luis), Marcos Vargas, Nikole Vargas and Victoria Vargas. He was the proud grandfather to Makayla, Alexis, Jamil, Jared, Jordan, Aniya, Kaiden, Leneea, Lucilla, Grayson, Andreas, Ruby, Rosen, Santana and great granddaughter Mylah. He graduated Pasco Senior High in 1973. Soon after, he began his career at the Hanford Project and through the years excelled to become a Health Physics Technician. He was able to travel to many Nuclear Plants in Washington, Oregon and California before retiring from Energy Northwest in 2003. Later, he completed his AA at CBC and followed his passion for helping people by becoming a Substance Abuse Counselor. Frank will forever be remembered for his amazing sense of humor, pranks, jokes and all-around good vibes. He played many roles in his life. He was proud of all his years coaching his son and nephews. He was involved in many adult sports leagues and loved to golf. He was a long time Raiders fan and was known to dress head to toe in Raider’s gear. You could find him at his grandkids many school programs, sporting events and birthdays. He is preceded in death by his father Felix Vargas, his brother and best friend Roy J Vargas, whom he will be laid next to, “From Womb to Tomb” as they always said. As well as his Father-in-law Albert Castillo. Services for Francisco will be held on Wednesday, December 22nd, 2021, at 11 am at Mueller’s Greenlee Funeral Home, 1608 W. Court St. in Pasco. Burial immediately following at City View Cemetery, Pasco “And he will wipe out every tear from their eyes, and death will be no more, neither will mourning nor outcry nor pain anymore. The former things have passed away” Revelation 21:4

Francisco Jalomo Vargas, 66, passed away on December 15th, 2021, with loved ones by his side. He was born on January 24th, 1955, in Toppenish, WA to Felix and Santos Vargas. He is survived by his Mother Santos Vargas, brothers Felix Vargas... View Obituary & Service Information

The family of Francisco Jalomo Vargas created this Life Tributes page to make it easy to share your memories.