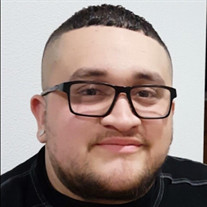 Ernest "Tito" Garza, age 30, passed away on October 6, 2021 at the Kadlec Regional Medical Center in Richland, WA. Tito was born August 15, 1991 in Pasco, WA to Ernest Garza and Maria Sanchez Silva. Tito graduated from Royal City High School in 2010 and was working as a Forklift Operator at a local winery for about four years. In July 2021, Tito got engaged to Keshia Gonzales and they are expecting their first child, Vincent Garza, due in January 2022. Anyone who knew Tito was touched by his big heart and contagious laugh. Tito always knew how to illuminate a room with his humorous personality. His ability to remember funny movie scenes, punch lines, and jokes always created frequent laughter and smiles. Tito was a selfless person who constantly put others first. His friends and family could always count on him as a loyal friend, big brother, or companion. He was always willing to listen when you needed a listening ear, and his friends and family will always remember his big bear hugs. He loved playing softball and golf with his friends and family. He enjoyed watching football, especially his favorite team the New Orleans Saints. He is survived by his parents, Ernest Garza and Maria Sanchez Silva; his fiancé, Keshia Gonzales; unborn son, Vincent Garza; his sisters, Marcy Garza, Melanie (Ricky) Servantes, Meagan Sanchez and Makaili Sanchez; his brother Daniel (Diana) Garza; his nephew, Daniel Garza and niece, Natalie Garza. A viewing service will be held at Mueller’s Greenlee Funeral Home in Pasco, WA on October 12, 2021 from 4pm-6pm. A private family funeral service is scheduled for 11am-12:30pm on October 13, 2021 at God’s New Generation Church in Pasco, WA and burial to follow immediately after. Burial will be held at City View Cemetery in Pasco, WA and is open to anyone wanting to attend.

The family of Ernest "Tito" Garza created this Life Tributes page to make it easy to share your memories.