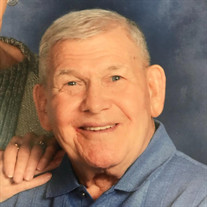 Ernest Hockaday June 20, 1927 - September 2, 2021 Pasco, Washington - Ernest R. Hockaday, age 94, passed away on September 2, 2021 at home in Pasco. Ernie was born in Happy Camp, California, on June 20, 1927, the 11th child of 14 to Philmer and Mable Hockaday. Ernie is survived by his youngest brother, Richard, of Montague, California. Ernie graduated from Yreka Union High School 1945. After high school, Ernie enlisted in the Army, then later went into pro baseball, playing for the Cardinals minor league teams in Reno and Fresno, before finishing his career playing for the Tri-City Braves from 1952-1954. During his time with the Braves, he met the love of his life, Marilyn Messerly, who sat in the stands and made a comment, "One day I'm going to marry that man." And so, they did, August 4th, 1953. Ernie went on to work for General Chemical in Finley, afterwards, he went on as the first person to be hired at Boise Cascade Container Plant, retiring in July 1989 after 30 plus years. Ernie loved hunting with his boys up in the Blue Mountains looking for the biggest elk and deer to bring home. He was known as one of the best fishermen around on the Columbia and Snake River. Ernie and Marilyn loved camping with their close friends, the Howell's, the Foreman's, and the Lawson's. He also had a secret code with the grandkids "let's go for a ride" which meant a ride to the Dairy Queen. He is survived by his wife, Marilyn, of 68 years; his five children, Linda (Dave) Wright, Steve (Denise), Nancy Chiodo (Chris Bates), Ronnie (Jody), John (Karol); 12 grandchildren, Ginger, Ryan, Ashley, Matt, John, Aaron, Tyler, Rachel, Stacy, Deana, Derek, Hunter; and 13 great-grandchildren. Ernie was a member of the First United Methodist Church. His ashes will be buried at Desert Lawn Memorial Park with graveside services scheduled for Friday, September 10, 2021 at 11:00 a.m. for those who wish to attend. The family would like to thank al the special caregivers from the Homecare Solution's team and Chaplaincy Hospice care who took great care of him and Marilyn. We could not have asked for better service for our family.

The family of Ernest R Hockaday created this Life Tributes page to make it easy to share your memories.