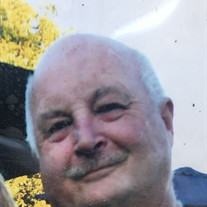 Emil Robert "Bob" Zlatich, Jr. was born October 11th, 1943 in Pasco to his parents Emil Robert "Slats" Zlatich and Wilma Ione Bailie. Bob attended Kennewick High School where he enjoyed playing baseball and being with his friends, including lifelong buddies, Harold Fettig and Mike Weltz. This is also where he met his future wife, Judith Marie Lingle. Bob graduated in 1961 and Bob and Judi were married the next year. They were married for 48 years, during which time they were blessed with four boys in four years! Bob began working for his dad at Denenny Brothers, an upholstery shop, by the Blue Bridge. After a few years, he went on to work at Boise Cascade. In 1974, Harold Fettig, Bob's high school friend, hired Bob to work and manage Zip's. He ended up working and managing all 3 Zip's in the Tri-Cities and in 1982 Bob was given the chance to purchase one of them. He chose the East Kennewick Zips. Bob had a strong work ethic and dedication to his career. Bob owned and operated Zip's by the Cable Bridge for over 35 years. His highlight on Saturdays was having lunch with his good friend Brice Wallace. During those years he also owned Slats JR drive-in and El Gringo's Mexican Restaurant where he made numerous lifelong friends. In Bob and Judi's life together, they shared a love of travel, classic shows and food. Around about 1993 they caught the "Bug" of antiquing, and they caught it bad!! Traveling all over and attending many auctions to purchase countless antiques to fill their new home in Finley. On one antiquing trip they flew to St Louis, Missouri and drove a U-Haul truck home filled to the top! Bob and Judi's greatest joy came from spending time with their family, especially their 10 grandchildren. Bob and Judi blessed the family with many memories of large holiday and birthday gatherings, their support at every sporting or school event and countless trips to the family cabin, during which Bob taught the grandkids how to stand still and feed the birds with pancakes on top of your head! Bob had a routine of watching his cherished re-run shows such as Mash, Cheers, The Andy Griffith Show, Barney Miller and anything with John Wayne. His greatest joy, after his love of family, was fishing. His sons were blessed spending time with him on many a fishing trip. He also greatly enjoyed teaching his grandkids about the peace and joy of fishing. Bob also had a passion for food. Whether it be to cook from his many cookbooks, watch it on TV or give his "professional" food critique to anyone who dared to listen. Bob was suddenly taken from us on August 25th, 2021. However, his quick-witted grin, contagious, innocent laughter and kindness that sparkled in his baby blue eyes will never be taken from those who knew him. Bob was a loving son, brother, husband, uncle, grandfather, great-grandfather and friend. He had a big heart and will be greatly missed by us and his extended family and friends. Bob was preceded in death by his wife, Judi. Bob is survived by his four sons: Robert, Brad (Danielle), Bryan and Brent. His ten grandchildren: Matthew, Brian, Tyler, Brittany, Zachary, Brooke, Bo, Megan, Nicholas and Noah. Two great-grandchildren: Wesley and Loren. Two sisters: Vicki (Harvey) Faurholt and Debbie (Jay) Massart and Numerous Nieces and Nephews. Bob also cared deeply for his good friend, Dan Higley, who was always there to fix something, watch football or tell a joke. Later in life Bob enjoyed many trips and fun times with his companion, Carla Mulholland. The Zlatich family would like to thank all local law enforcement and first responders for their hard work, dedication and compassion shown to the family during this time. A memorial service is being held at 5PM on September 25th at Calvary Chapel's amphitheater (10611 W Clearwater Avenue, Kennewick). We ask that you bring a lawn chair or blanket to sit on.

The family of Emil Robert Zlatich, II created this Life Tributes page to make it easy to share your memories.