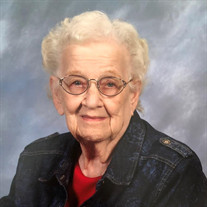 Dorothy (Dot) Myers Miller passed peacefully from this life on April 21, 2020. Dot was born on January 27, 1918 in Pasco, WA to early Pasco settlers, Carl and Adah Myers during the pandemic of that year, and she decided to "shelter in place" during this pandemic with her husband Otto, her beloved 10 siblings, a host of friends and the Lord Jesus she knew and trusted. Dot referred to herself in her memoir Water Under the Bridge as "the #10 kid in a family of 11 who learned from her mother that she had a 'God friend' that she could write and talk to." She continued to write to and about many of her friends and family throughout her long life. Dot graduated from Pasco High School in 1935, and often reminded her family about her years as a basketball player and cheerleader for PHS. "On May 15, 1937 marriage to Otto Valentine took place in Pasco at the parsonage of the church where she had been baptized. The marriage license was obtained at the Franklin County Courthouse for $1.50." Dorothy and Otto spent the first fifteen years of their married life in Ritzville, WA where they welcomed two daughters. In 1953 they took the opportunity to establish a retail lumber and building supply in Connell, WA. Along with the new business both Dot and Otto accepted new challenges; they joined a local group to organize North Franklin County's Development Organization, participated in the Chamber of Commerce and became members of Gideon Lutheran Church. Dot was an active member of the National Federation of Business and Professional Women and served as BPW's State President. As President she was invited to visit Japan as a guest of their sister club in Kobe. In Japan she observed many historical sites including a view of the ruins of Nagasaki. In her notes she penciled: "Seeing the ruins I couldn't help but remember the year I spent working on the Manhattan Project and the dropping of that bomb in August of 1945. That night I wrote in my journal: Anything God but hate - we have seen much in our day. The best it can do is scar our souls and gnaw our hearts away. Help us learn much more than this as the years go rolling on. The sun still sets to daily rise, it's we who resist that dawn. May we all unite before the cloud wrapped end - we're sickened by the hate and toll is takes -God help us unite as friends." Her years in BPW included working for the Equal Rights Amendment that passed in Washington in 1972. "In the early 1980's this #10 kid, now a grandmother of six was knee deep in politics along with her legislative work in BPW. She served as State Committee Woman for her chosen party, served as a delegate to State Conventions and in 1980 was nominated as the Democratic candidate for Washington's State Legislative Representative." In 2017 Dot moved to Fleur Adult Family Homes where she passed of natural causes. She is survived by two daughters, Cheryl Patton and Pamela Clark, six grandchildren, 11 great grandchildren and three great, great grandchildren. Due to current restrictions a private graveside service will be held at City View Cemetery in Pasco in the coming week. The family sincerely thanks Paige-Patton Morris, Debra Lang-Jones and care givers of Fleur de Lis for the tireless help and support provided not only for Dorothy but also for all their residents. In lieu of flowers, please consider donating to the Franklin County Historical Society.

Dorothy (Dot) Myers Miller passed peacefully from this life on April 21, 2020. Dot was born on January 27, 1918 in Pasco, WA to early Pasco settlers, Carl and Adah Myers during the pandemic of that year, and she decided to "shelter in place"... View Obituary & Service Information

The family of Dorothy May Miller created this Life Tributes page to make it easy to share your memories.

Dorothy (Dot) Myers Miller passed peacefully from this life on...