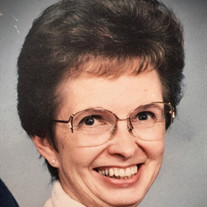 Doris Mae Mansperger, 88, of Pasco, Washington, passed away peacefully, after a short illness, at her home surrounded by family. Her burial service will be at Mueller's Tri-Cities Funeral Home at Desert Lawn Memorial Park. The private viewing will take place at 12:00 noon on Saturday, May 1, with a graveside service to follow, beginning at 1:00 PM. A full memorial (Celebration of Life) service will be held in July. She was born Doris Mae Church on March 20, 1933, to Adelbert and Thora (Alden) Church of Ellensburg, WA. She attended local schools, was the first of her family to attend college, and was awarded a Bachelors of Home Economics from Washington State University in 1955. Doris married Carl Andrew Mansperger Jr., April 5th, 1955, Ellensburg, WA. A caring U.S. Air Force officer's wife, she followed her husband devotedly all around the country and the world making a loving home for her family. Doris was recognized for the outstanding contributions she made while assisting the families of both military and civilian personnel in Iran. She was a loving wife and mother who enjoyed gardening and grew flowers and tomatoes practically everywhere she lived. She was also an avid reader, having read thousands of books in her lifetime, and enjoyed listening to music. She had style and kept her house immaculate. Walking into Doris's home was like walking into a magazine. Doris and Carl retired to a farm near Pasco, WA, where they farmed alfalfa, wheat, potatoes, and grass seed. After Carl passed in 2009, Doris eventually had a beautiful new home built in Pasco, where she spent the remainder of her life reading books, contributing to educational and charitable causes, and enjoying her grown children, grandchildren, and great-grandchildren. Survivors include sisters June McNealy, Ellensburg, WA; Meneva Reeves, AZ; semi-sister Sue Green, Poulsbo, WA; sons Steven, Tacoma, WA; Mark, Richland, WA; daughters Deborah Merritt, Roseville, CA; Cathy Bunge, Bowie, MD; 11 grandchildren; and 3 great-grandchildren.

Doris Mae Mansperger, 88, of Pasco, Washington, passed away peacefully, after a short illness, at her home surrounded by family. Her burial service will be at Mueller's Tri-Cities Funeral Home at Desert Lawn Memorial Park. The private viewing... View Obituary & Service Information

The family of Doris Mae Mansperger created this Life Tributes page to make it easy to share your memories.