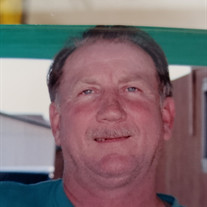 David M. De Pauw July 7, 1953 - December 25, 2021 Sometimes the Lord calls a person home just because it's time. God's time. It makes us appreciate and think twice about the people in our lives and why we are here and where we are going for eternity. Dave passed away after suffering from ALS for over a year. Dave was the kind of person that was there to help in any way he was able. He was a doer. He had a creative nature. He liked building things. He was a natural born mechanic like his father was. He enjoyed working and playing. He liked water skiing, snow skiing, riding dirt bikes, four-wheeling, fishing, golf, art…he taught himself how to paint with the help of Bob Ross and created some beautiful paintings. He taught himself how to play guitar when he was 14 and got better and better as the years passed. He learned to play many other instruments also. He had developed an ear for music. He would play every single day, just because. He met his wife, Mary, one summer day in 1974 when he went to ask Mary's sister if she wanted to go to the beach. Her sister liked someone else at the time, so asked Mary if she would go in her place because Dave was such a nice guy and she didn't want to hurt his feelings. Dave and Mary, little by little, became inseparable. They married in November 1976. After a couple years in Southern California where they both grew up, they decided to leave the big city life and try a smaller town up in Washington state where the Columbia River was close by for fishing, water skiing, and the mountains also for snow skiing, and there were wide open spaces for riding dirty bikes and Mary's family was there. Over the years, they had four beautiful children, two boys and two girls, which was a challenge as families are, especially after investing in a house and money was tight but, they stuck it out and made it through those tough years by the grace of God. Dave was not verbally religious but he lived the 10 commandments and had a deep sense of justice, right and wrong. Dave will be fondly remembered by his humble sense of humor and play on words. He made simple things fun and his smile made everything better. He was warm and affectionate and caring, although at times also tough and stern. He was definitely a multifaceted guy, very loving, and very much loved. Dave is survived by his brother, Walter (Butch) De Pauw; wife, Mary De Pauw; children, Sara Weisbeck, Jacob De Pauw, Rebecca De Pauw, and Michael De Pauw.

David M. De Pauw July 7, 1953 - December 25, 2021 Sometimes the Lord calls a person home just because it's time. God's time. It makes us appreciate and think twice about the people in our lives and why we are here and where we are going for... View Obituary & Service Information

The family of David M De Pauw created this Life Tributes page to make it easy to share your memories.