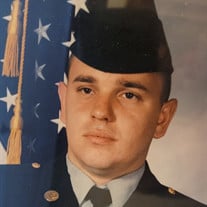 Daniel Aaron Borisch, 49, of Kennewick, died Oct. 3 in Kennewick, Washington. Daniel was born in Walla Walla, Washington. He lived in Kennewick while he was a young boy, moving to Gaithersburg, Maryland for one year, then Harrisburg, Pennsylvania for one year, then moved to Buffalo, New York where he finished middle school and high school, graduating from Frontier Central HS in Hamburg, New York. Daniel then moved back to the Tri-Cities with his parents, where he attended Columbia Basin College, earning an Associate's Degree. Daniel then enrolled at Eastern Washington University in Cheney, Washington. After a few years there, he then decided to join the military and joined the US Army. He completed basic training at Ft. Leonard Wood, Missouri, then was stationed at Ft. Hood, Texas. From there, Daniel was sent to Baumholder, Germany, known as the Rock. While there, he was selected and sent for deployment to Kosovo and then back to Germany where he finished out his time in the service and then returned to Kennewick, Washington. He then went to work at the Umatilla Army Depot as a Control Room Operator, from start to finish, of the Demil project for DOD. He then went to work for Framatome here in Tri-Cities and then found his last employment with the DOE subcontractor, CHPRC, at the Hanford site as a Stationary Operating Engineer. Daniel, or Dan as he was called, was quite a fun man. He loved his family, he loved to BBQ grill-the GRILL MAN! He spent endless hours supporting his kids, grandkids, nephews and nieces at all their sporting events. Daniel was always there to lend a hand if needed, and a friend to anyone he met; a big teddy bear who always had a smile and sense of humor. He was an avid Pittsburg Steeler fan and wore the team logo and colors everywhere. He was a huge animal lover, loving his two dogs. Daniel loved the holidays, Christmas being one of his favorites. He usually finished up his Xmas shopping months before the holiday, and he loved going to Griggs midnight sale with his parents. He loved the holiday food with family and always was 'smiles and laughs' at every family event. Daniel was devoted to family and especially to his two sons whom he loved with all his heart. He was a devoted man to the woman he loved and has spent the last 12 years with, Mary Joslyn. Daniel is survived by both parents, Ronald and Barbara Borisch; brother, Robert Borisch; sister-in-law, Maria Borisch; sons, Jordan Borisch, and Kevin Borisch and his wife, Theasa. He is also survived by his grandchildren, Hazel, Landon, Adrain, Athena, and Isabel. He also leaves behind his longtime partner of 12 years, Mary Joslyn, whom he shared everything in life with. They had met at Eastern Washington University in college and had a bond that never ended. Daniel will be missed by so many, a man loved by all and we were blessed to have had him as long as we did. Love you, Daniel.

Daniel Aaron Borisch, 49, of Kennewick, died Oct. 3 in Kennewick, Washington. Daniel was born in Walla Walla, Washington. He lived in Kennewick while he was a young boy, moving to Gaithersburg, Maryland for one year, then Harrisburg, Pennsylvania... View Obituary & Service Information

The family of Daniel Aaron Borisch created this Life Tributes page to make it easy to share your memories.