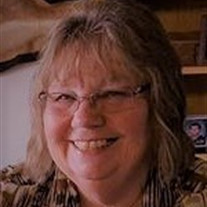 Cheryl Harper, 73, of Kennewick, WA, passed away on April 12th, surrounded by her family. On June 3rd, 1948, Cheryl was born to Chesley and Marjorie Bickford in Vancouver, WA, where she grew up on the family sawmill in Battle Ground, WA. While attending a dance at the School for the Blind in Vancouver, Cheryl met the love of her life, Alvin Harper. After she graduated from Battle Ground High School, they married on July 16, 1966. They had four children, where she became a dedicated mother and homemaker and even took in several of her children's friends who needed a place to go and quickly became a mother to them. Cheryl loved to be social, and her favorite past times were family functions and conferences with the Twice and Thrice club AKA Mothers of Multiples and the Lions Club, where she and her husband spent as much time possible volunteering with projects such as mentoring a Leo Club, working with the Ocean Beach Alternative School, working many food drives, Sight and Hearing, Guide Dogs for the Blind and so much more. These brought many great adventures traveling to Canada and around the county, where she met many lifelong friends and honorary family members. She enjoyed participating in the Relay for life where ironically, she later became a cancer survivor. She also attended just about every family event she possibly could and adored a good wedding, holiday party or a get together just because. Family and friends were everything to her. Cheryl was an amazing mother and attended any and everything she possibly could of her children's activities. She later became an even more dedicated grandmother if that is even possible. When she couldn't make a game, she watched a live stream of it. She loved her grandbabies fiercely and bragged on every one of them and their unique abilities. There couldn't be a prouder mother and grandmother. She had a hard time not living close to all of them, but she soaked up as much time as possible with them and got in those much-needed hugs. Cheryl was one of the strongest people around. She carried the weight of the world on her shoulders, but no matter what came about from breast Cancer, even open-heart surgery, she did it with grace, kindness, and a smile. Her love language was always acts of kindness, and she absolutely lived that by taking care or lending a hand to whoever she met if she could. When her own babies or grandbabies were sick, she would do her best to be there, giving them her healing touch. She was always a caretaker by nature, especially to her loving husband, who had significant health issues over the last couple of years. She was at his side 24/7, it was hard to get her away from him even when she had help. It is hard to imagine the love she had in her heart for others, as it was immeasurable. Her legacy of kindness and love will live on forever. Cheryl was predeceased by her parents, her brother Ray and her sister Alice. She leaves behind her husband of 55 years, Alvin, her Children; James (Janet), Marjie (Lyle), Josie (Blaze), Genni (Bill), her brother Frank (Judy), her brother-in-law Mel, her Grandchildren, Blaze, Chris, Clint, Will, Ben, Aiden, Owen, Jeremy, and their children plus so many more friends and family. So that her husband can be in attendance, there will be a celebration of life at their daughter Genni's home later as the weather warms up and when he has settled in his new home. If you would like to make a donation in her honor a few ideas would be the Long Beach, WA Lions Club, The Kennewick, WA Lions Club or the Tri-Cities Cancer Center.

Cheryl Harper, 73, of Kennewick, WA, passed away on April 12th, surrounded by her family. On June 3rd, 1948, Cheryl was born to Chesley and Marjorie Bickford in Vancouver, WA, where she grew up on the family sawmill in Battle Ground, WA.... View Obituary & Service Information

The family of Cheryl Anne Harper created this Life Tributes page to make it easy to share your memories.