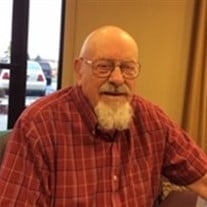 Charles H. Goeckner, who was a loving father, grandfather, brother, and friend passed away at Prestige Assisted Living in Richland on November 4th at the age of 91 years old. Charles was born in Keuterville, Idaho on May 6, 1929 to Charles and Margaret Goeckner Sr. He is survived by his four siblings, brothers: Don (Judy) Goeckner, Ralph (Joyce) Goeckner and their children and sisters: Sr. Mary Marge Goeckner OSB, and Virginia Goeckner. Charles will now rest peacefully in heaven with his wife Katherine whom he married on May 5th, 1951. They were married for 58 years before her passing in 2010. Their first home was in The Pasco Navy homes until building a home on five acres in west Pasco where they raised their seven children and lived for 64 years. Charles served as a cook in the US Army during the Korean War from November 1950 to July 1952. He worked for Burlington Northern Railroad as a Brakeman where he retired after working there 42 years. He was a member of St. Patrick's Catholic Church, Knights of Columbus, and American Legion. Charles volunteered for many years at St. Patrick's Church working Bingo Night, and helping with the collection baskets during Sunday Mass. He also volunteered at St. Vincent DePaul's food bank as part of the "bread bunch." Words cannot express how much Charles was admired by his family and anyone who had the privilege to meet him. If you knew him, you would have had the pleasure of hearing one of his many stories. He had a memory like no other and he loved to recount stories from his youth. He was a man of many talents, hobbies, and humor. He enjoyed tinkering on his small farm, woodworking, doing puzzles and making frames, playing cribbage, completing crossword puzzles, listening to old-time music, recycling, and playing the Lotto. One of his greatest joys came from spending time with, and attending, anything that had to do with his grandchildren and great-grandchildren. They always put a smile on his face and he loved all of them so much. He is lovingly remembered and will be greatly missed by his family. Daughter Velinda Brown, grandsons; Vaughn/Judy Brown (Savannah, Reagan, Conrad), and Ron/Lori Brown (Riley, Railynn). Daughter Connie Warner, grandson Michael/Brynn Warner (Reese, Van, Mara), granddaughters Jennifer Warner, and Shelby Warner. Daughter Sandra/Ron Wilson, grandsons Ryan/Holly Wilson (Ellie, Maddie, Rhett), and Cody/Heather Wilson (Paige, Brynn), granddaughter Kati Wilson. Daughter Rochelle/Scott (deceased) Herron, grandson Blake/Lauren Herron (Mason), granddaughter Lea/Josh Gardner (Dylan, Lennon, Kendrey) and grandson Dillon Herron. Daughter Diane Kohne. Son Darrell/Julie Goeckner, grandsons Charles James Goeckner, and Christopher/Shannon Goeckner (Addison). Daughter JaiLeene/Terry DeJuan, granddaughter Talya DeJuan. He is preceded in death by his parents, his wife Katherine A. Goeckner, son-in laws, Conrad Badt and Scott Herron, four infant grandchildren, aunts and uncles and numerous special friends. In Lieu of flowers, donations can be made to St. Vincent DePaul's Food Bank, Knights of Columbus, or St. Gertrude's Monastery in Cottonwood, ID.

Charles H. Goeckner, who was a loving father, grandfather, brother, and friend passed away at Prestige Assisted Living in Richland on November 4th at the age of 91 years old. Charles was born in Keuterville, Idaho on May 6, 1929 to Charles... View Obituary & Service Information

The family of Charles Henry Goeckner created this Life Tributes page to make it easy to share your memories.

Charles H. Goeckner, who was a loving father, grandfather, brother,...