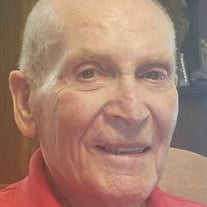 Billy James Elam, 93, of Kennewick, WA, entered the loving presence of his Lord and Savior on December 11, 2020. Bill was comforted and cared for by his loving daughters and the nurses of Nuclear Care Partners. Bill died of natural causes. Bill was born April 11, 1927 to Frances Theodore (Ted) Elam and Winnie Ruth Elam(Thompson). Shortly after his birth, his mom and dad separated. Billy and his mother moved in with Billy's beloved grandfather, Papa. His six uncles held a loving and protective soft spot in their hearts for both Winnie and Billy. There is a sweet picture of a two-year old Billy as he rides his little red wagon; however, one of the wheels on the wagon is a bit unusual. The original wheel had fallen off, so his doting uncles removed a fly-wheel pully off an old well and used it as the replacement wheel on Billy's beloved red wagon so he would continue to experience some joy each day. Bill dropped out of high school his junior year to join the Navy during WWII. His two motives were to see the world and send the bulk of his check to his mother so she could purchase a home. He ended up in the remote islands of the South Pacific. Bill rejoined the Navy for a second tour of duty hoping once again to see the world; however, he was assigned to the same location! It would be years before he would obtain his GED and attend college. After his discharge he returned to Duncan, OK, and met the love of his life, Patricia Ann Hixon. It was her visibility in the movie ticket booth which caught Bill's eye and his heart. Bill and Patt married in April of 1950 after knowing each other only two weeks. It was a love that endured, and they joyfully celebrated their 70thWedding Anniversary on April 29, 2020. Bill was a self-made man in the truest sense. He bought a welding machine and set it up in his backyard and taught himself how to weld, obtained his journeyman welder card and began working in the nuclear industry. Each child was born on a different nuclear project. He would laugh and say that we gave "nuclear family" new meaning! Bill decided that the Hanford Reservation would provide stable employment and they would remain in the Pacific Northwest till all his children graduated. It was during this time he joined Kennewick Baptist Church. He soon became the choir director and remained in the position for 12 years. He served the church as a Sunbeam leader, Sunday Schoolteacher, Youth leader, Training Union teacher, Sunday School Superintendent, Church Treasurer, and Deacon for 50+ years. True to his word, the family remained in the Pacific Northwest and as soon as their youngest child graduated, he went back on the road consulting on nuclear projects all throughout the United States. He retired when his first great grandson, Elam James Blackwell was born. He and Patricia moved to Dallas, TX to care for Elam James for three years. Bill's greatest heartache was being preceded in death by his eldest child and only son, James L. Elam. His greatest joy was finally receiving his GED and graduating with his granddaughter, Hailey from Columbia Basin College. He loved meeting her in the Student Union to buy her a hot chocolate between classes, and after two years they walked together at graduation. He was amazed and thrilled by his ever-growing family, and could often be heard to say, "There isn't an ugly one in the bunch!" Bill is survived by three daughters: Susan (Rob) Mills, Karyn (Kerry) Kost, Patricia (Glenn) Barling; six grandchildren: Heather (Ben) Blackwell, Hailey (Derek) White, Shadrach (Rowan) MacDonald, AJ (Danise) Barling, Leatha (Justin) Hall, Hannah (Jonathan) Tedeschi; and 16great-grandchildren. In lieu of flowers, the family suggests a tribute donation to the church's building fund, as maintaining the physical church structure was a ministry close to Bill's heart. COVID restrictions prescribed a small service which was held in his honor at Kennewick Baptist Church with Rev. Dustin Hall presiding. Bill will be interred next to Patricia Ann, and their son, James, in Duncan, OK. The family would like to thank the caregivers of Nuclear Care Partners and Heart links Hospice and Palliative Care for their care and dedication to our father in his last days.

Billy James Elam, 93, of Kennewick, WA, entered the loving presence of his Lord and Savior on December 11, 2020. Bill was comforted and cared for by his loving daughters and the nurses of Nuclear Care Partners. Bill died of natural causes. Bill... View Obituary & Service Information

The family of Billy J. Elam created this Life Tributes page to make it easy to share your memories.