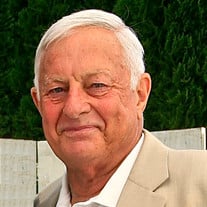 Bill Ray Mercer, after a valiant fight with cancer, passed away peacefully at his home on March 6, 2020 with his family at his side to return to live with his Heavenly Father. Bill was born on September 17, 1942 in Denver, Colorado. He was the oldest of 3 children and was raised in Kennewick, Washington by his mother, Faye Evelyn Selle, and his adopted father, Raymond Mercer. He graduated from Kennewick High School in 1960. Bill was a veteran of the United States Air Force where he served for 4 years. He attended college at Washington State University and received a Bachelor's degree in Economics in 1970. During his time at college, he met his eternal companion Karen Paulson. They married on June 12, 1971 in Kennewick, Washington, and were later sealed for time and eternity in the Salt Lake Temple in October 1973. They had four children whom he loved very much. Bill and Karen were married for 39 years before she passed away from breast cancer in 2010. Bill joined the Kennewick Police Department in 1971 where he served as a police officer for 21 years. After his retirement from the police force, he went back to school to become a Health Physics Technician. He worked in the Hanford area for 10 years. Bill was a faithful member of The Church of Jesus Christ of Latter Day Saints. Bill served in many church callings and loved to serve others. Bill enjoyed fishing, camping, NASCAR, motorcycle rides, racing go-karts, working in his yard and spending time with his children and grandchildren. Bill remarried on November 22, 2014 to Rosa. They split their time between Kennewick and Seattle. They enjoyed traveling to Arizona, going to the farmers' market and attending Mariners' games. Bill is survived by his wife Rosa; his children: Elizabeth (Kevin) Kelly; Fred (Brittany) Mercer; Arin (Gary) Long; and Keith (Erin) Mercer. Grandchildren: Karissa, Dalin, Mitchell Kelly; Ashton, Rori, Gage, Jaxson Mercer; Fisher, Alivia, Finn Long; and Audrey, Connor Murphy. Sibling: Penny (Arnie) Loraas; and aunts, uncles, nieces and cousins. For those who wish to attend, a family greeting will be held at 10 a.m. on Saturday, March 14, 2020 at Mueller's Tri-Cities Funeral Home at 1401 South Union in Kennewick. The funeral service will directly follow at 11 a.m.

Bill Ray Mercer, after a valiant fight with cancer, passed away peacefully at his home on March 6, 2020 with his family at his side to return to live with his Heavenly Father. Bill was born on September 17, 1942 in Denver, Colorado. He was... View Obituary & Service Information

The family of Bill Ray Mercer created this Life Tributes page to make it easy to share your memories.

Bill Ray Mercer, after a valiant fight with cancer, passed away...