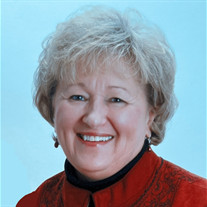 Ann Marie (Nedved) Morgen was born on April 5, 1951 in Yankton, South Dakota, the daughter of Leonard and Frances (Cimpl) Nedved. Surrounded by her family, Ann passed away on January 12, 2022 in Kennewick, Washington. She was 70 years old. Ann was raised on a family farm south of Dante, South Dakota and grew up helping out on the farm with her two older brothers, Gene & Larry, and her younger brother, Jim. Ann attended Ree 62 Country School (a one-room schoolhouse) through 8th grade. She attended high school in Wagner, South Dakota and graduated in 1969. In her teens, Ann participated in Catholic Daughters, student council, F.H.A., cheerleading, basketball, track, and she enjoyed dances at Rest Haven. Ann was united in marriage to Gerald (Gerry) Morgen of Wagner on July 20, 1968 at Assumption Catholic Church in Dante. They moved to Rapid City, South Dakota in 1970, where they lived for seven years. During that time, she worked at JCPenney. The family moved to Kennewick, Washington in August 1977, where they have lived for the past 44 years. Ann worked at Safeway in Kennewick for 30 years. She retired in 2009 as the Front-End Manager. Ann and Gerry have been parishioners of St. Joseph's Catholic Church in Kennewick for 44 years. Ann enjoyed gardening, plants & flowers, as well as a huge vegetable garden which produced a large amount of tomatoes, cucumbers, corn, and pumpkins. Ann & Gerry also grew the most delicious cherries and peaches, and Ann is known for her 'famous' peach cake. After she retired, Ann was very involved in her children's and grandchildren's lives, for example by helping Brenda at craft shows, babysitting the grandkids, dog-sitting, and attending as many soccer and volleyball matches as she could. Ann loved to play Pinochle and the card game "65" - also affectionately known as "Count Your Cards Fonda," named after her mother. Ann also enjoyed attending WSU football games, pickle ball and bowling. She especially enjoyed the bowling tournaments and the weekly lunch & cards with "the bowling ladies." Ann was preceded in death by her parents, Leonard and Frances Nedved, and sister-in-law, Sherrie Nedved. Thankful for having shared in her life are her husband, three brothers, two children and four grandchildren: (husband) Gerry Morgen of Kennewick, Washington; (brothers) Gene and Norma Nedved of Yankton, South Dakota, Larry and Peggy Nedved of Wagner, South Dakota, and Jim Nedved of Wagner, South Dakota; (daughter) Brenda and John Fogliani of Bothell, Washington; (son) Brian and Traci Morgen of Woodinville, Washington; (grandson) Ryan Fogliani, and (granddaughters) Lauren Fogliani, Sydney Morgen, and Emery Morgen. Visitation (from 5-8 pm) with a Rosary (6 pm) will be held Friday, January 21st at Mueller's Tri-Cities Funeral Home on Union Street in Kennewick. A Funeral Mass will be held on Monday, January 31st at 11:00 with a Rosary at 10:00 am at St. Joseph's Catholic Church in Kennewick. Masks are required at both services. A live stream of both of the services will be provided by her family via Facebook for those unable to attend. For those interested in participating virtually, please request access to the Group live stream page a day or more in advance of the events at the following link: https://www.facebook.com/groups/492270825564250/ In lieu of flowers, a donation can be made in Ann's honor to St. Jude Children's Hospital or to the St. Joseph's Indian School in Chamberlain, South Dakota.

Ann Marie (Nedved) Morgen was born on April 5, 1951 in Yankton, South Dakota, the daughter of Leonard and Frances (Cimpl) Nedved. Surrounded by her family, Ann passed away on January 12, 2022 in Kennewick, Washington. She was 70 years old. Ann... View Obituary & Service Information

The family of Ann Morgen created this Life Tributes page to make it easy to share your memories.