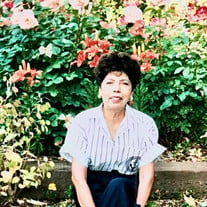 On Tuesday, November 19, 2019, our beloved wife, mother, grandmother, great-grandmother, and great-great-grandmother left us while sleeping peacefully at Kennewick Life Care Center. She was surrounded by family. Angela Hernandez Fraga was known to all of us as Ama (except for her querido güero, who called her Mi Amor). Born on February 23, 1934 in Penjamo, Guanajuato, Mexico, Ama has been reunited with friends and family she has not seen in a long time, including her parents Josefa Camacho and Brigido Hernandez; her siblings Jesus, Manuel, Paulina, Vicenta, Margarito, Guadalupe, Carmen, Benjamin, and Dolores, as well as her grandson, Baby Dan. When Ama first met her querido güero, she was working at a dentist office in Mexicali. One day in early 1957, the future love of her life had accompanied a friend to his dental appointment and, when he saw Ama, told his friend "I am going to marry that girl." Ama, who had seen him making eyes at her, told her friend and co-worker, "I would never go out with that guy." Three months later, they were married. Ama will be lovingly remembered by her beloved Husband, Guillermo; her loving children Angelica and her husband Scott Soggee; Leticia and her husband Steven Nadler; Sandra and her husband Alejandro Najera; Myrna and her husband Arturo Partida; Josefina and her life partner Josh Cook; as well as her sons George, John and Joel. She was a cherished grandmother to Sara, Antonio, Sandra, Sofia, Benjamin, Jennifer, Patricia, Angela, Anthony, Carissa, Alyssia, Alex, Emma, Hannah, Jonathan, Angelic, Christian, Kylie, Joseph, Ashlee, Jordan and Theron, as well as her great-grandchildren Angelica, Isaiah, Ariana, Priscilla, Anayah, Isabella, Marco, Nayeli, Cecilia, Victoria, Diego, Mani, Peyton, Lilybee, Pedro, Santino, Xavier, Elizabeth, Carter, Aubrey, Deyana, Briannah, Jordan and Marcus. Her great-great grandchild Marcelo and generations to come will get to know and love Ama through the stories we tell. Ama was renowned for her cooking, sewing and gardening skills. Her frijoles were legendary, as was her salsa that was always just right. Her wanderlust took her to several wonderful places, including many beaches, forests, and countless cities and landmarks. Her adventures included travelling throughout the United States, Mexico and Rome, Italy. She was an avid collector of knick-knacks that were meaningful to her and always had a story to tell. She also cherished the shells and rocks she collected in her travels, as well as the ones friends and family brought back to her from their own travels. Holding them in her hand helped her imagine the faraway places they came from. Ama made friends everywhere she went, and her love for her family was immense.

The family of Angela Fraga created this Life Tributes page to make it easy to share your memories.