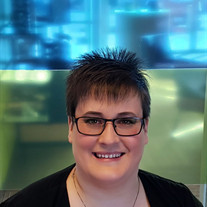 Amanda Michelle Myhre April 14, 1986 - March 10, 2021 Amanda was called home in the early hours of Wednesday, March 10th. Amanda was born in Colorado Springs, Colorado to Virgil and Sheri Leners. Amanda was a giggly, curious, bouncy, fearless child, always asking the "why" of things. She loved animals and had many pets from guinea pigs to boa snakes. At 7, Amanda and her dad moved to Provo, Utah for his work. Here, she began to enjoy and excel in school and developed her love of music and began learning the violin. It was while living in Provo they met Brenda. Virgil and Amanda also made the decision to be baptized together as members of the Church of Jesus Christ of Latter-day Saints by Brenda's Grandpa, Richard Rowley. Two years later, Virgil's job transferred them to Boise, Idaho. While in Idaho, Virgil and Mandy asked Brenda to join their family and they were married May 30, 1997. In July of 1999, Amanda and her family moved to Kennewick, Washington. In Kennewick, Amanda quickly made friends and was a social butterfly. She loved her brother and sister who had been added to the family. At 15, Mandy had her first grand mal seizure. She quickly took her disease under control and changed sports from basketball to golf and got a nice 10-speed bike instead of a driver's license. Amanda was never one to shy away from hard things. Amanda graduated from Kennewick High in 2004. After high school, she tried on many hats and ended up in the banking industry. It was here she met the love of her life, Aaron Myhre. Her family had added 4 more to their numbers and on March 3, 2009 we buried her brother Joseph. Later that same month Amanda and Aaron were married on March 28th. They were each other's best friends and lived life fully enjoying many vacations and cruises together. Amanda also became an avid Tri-City American hockey fan and in typical Amanda fashion quickly made friends with the people around her and they became her hockey family. Amanda was also a life-long Denver Bronco fan and, with her father, played fantasy football together for many years. Amanda worked her way up in the bank and was Assistant Manager at the Southridge Numerica branch. She loved her job and the people she worked with and served. Aaron was a wonderful helpmate for Amanda and she was always telling everyone how blessed she was to have such an amazing husband. Aaron grounded, protected and loved her fiercely. After trying for years, Amanda and Aaron were able to conceive a beautiful baby girl. Hannah Kaye was born March 27, 2020 bringing sunshine to everyone's life especially during the covid pandemic. Amanda loved the time she had to snuggle her baby; she loved being a mother. Amanda will be greatly missed by all who knew her. We have had many people tell us she was a bright, positive spot in their lives. Amanda is preceded in death by her brother Joseph. She is survived by her Husband Aaron and daughter Hannah, her parents Virgil and Brenda Leners and Sheri Bridges, her siblings Charles Kiser, David Kiser, Tanya Kiser, Kaydell Leners, Elizabeth Leners, Caitlyn Leners, Sabriye Leners and Davina Leners. All our love until we meet again. P.S. Amanda has been promoted to Numerica's heaven branch with all manner of banking and, at her mother's request, drive throughs.

The family of Amanda Myhre created this Life Tributes page to make it easy to share your memories.