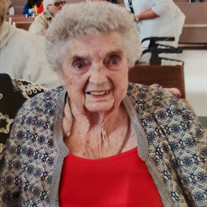 A remarkable woman. Alberta Ann (Bowman) Halverson lived a long and full life. She was resilient, fearless, tough, stubborn, unconditionally loving, loyal, sharp witted, dedicated to family, charitable, a fantastic mother-in-law, WOOHOO, and as many have said,” Salt of the Earth”. The struggle of her youth built a strong resolve to provide something better for her children. She loved nothing more than to be surrounded by her five children, nine grandchildren and 18 great grandchildren. She was born just prior to The Great Depression in Tooele, Utah, February 28,1928. Her parents Albert Bowman and Cynthia Platt were unable to establish a stable secure home for she and her brother. At age seven with brother on tow, she fled the turmoil of that home to live with her grandmother in Heber City, Utah. Though it was a loving household, times were hard, and security was uncertain. Eventually she ended up living with her aunt and uncle whom she called “Mom and Dad” in Burley, Idaho. She began working as a waitress at the Burley bus station at age 12. Even though she was working she continued to attend school. Like many of that time, schooling for girls was not a priority. Education was important to her especially for we girls. She was the first in her family to graduate high School. She always longed to be a teacher. Her influence produced four educators from our family. She continued to work at the bus station until she met and married Earl A. Halverson at age 19. The young bride moved across the river to the family farm in Rupert, Idaho that Earl worked. Shortly after, Dad’s mother was stricken with a debilitating stroke, one of several that would eventually take her life. Mom and Dad moved into the main house so Mom could care for her mother-in-law and Dad’s youngest brother. A few years later an amazing opportunity availed itself for them. As part of the Columbia Basin Project, G.I.s could register their names into a lottery to be drawn to select land to farm in Eastern Washington. Most people were lucky to be drawn once but call it fate, they were drawn twice. In the fall of 1955, they loaded up the family and became pioneers in the Columbia Basin, twenty miles north of Pasco. When they arrived there were few roads, no electricity, nothing but raw land, sagebrush, rattlesnakes, and wind. This young woman, her G.I. farmer husband and five kids under the age of seven carved out of the wilderness what is now the family farm at Eltopia Washington. Mom continued to live there until she died. In the beginning, Mom cared for our family without electricity, no running water, no indoor plumbing, none of the amenities we are accustomed to today. Everything had to be done by hand, every tree had to be planted. Not only did she do all that was required in raising a family, but she worked in the fields as well. Mom was full of faith. As a girl she was raised Mormon. She honored the doctrine of The Church Jesus Christ of Latter-day Saints. When she and Dad began to have children, a problem arose with what faith the children would be raised. They agreed to take instruction in each other’s church. In her instruction she was struck by the lesson on the foundation of the Catholic religion. She then converted to Catholicism. Her faith was profound. It brought her peace and comfort when needed. She loved her church. A few years after moving to the Columbia Basin she contacted the diocese about establishing a church out in the country to better serve the growing community. Pasco was the nearest Catholic church available to them. She in partnership with Father O’ Day from St Patrick’s parish conducted a census of Catholics in the area to confirm the merit of a new parish. And so it began, the establishment of St Paul’s parish on Glade Rd. She could be very stubborn, both a blessing and a curse. Her determination was not only instrumental in establishing St. Paul’s parish, but she worked relentlessly to get Eltopia included in a fire district. Battle won. She was not a by-stander She was not a joiner of clubs but active in getting things done. She was always involved in our schooling. She was always there for her kids like it or not. Her family and her church were everything to her She was our ROCK. She is survived by her five children, Steve and Sylvia Halverson, Marsha Halverson and John Hawley, Ivan and Cathy Halverson, Gayle and Pete Peterson, Connie Halverson, nine grandchildren, and 18 great grandchildren. We can only hope to be as remarkable as she. Momma was so proud of each one of us. Rosary @ St. Paul’s Catholic Church, Glade Rd. 7/18 7:00pm Service @ St. Paul’s Catholic Church, Glade Rd. 7/19 @11:00am Grave site @ a later date

The family of Alberta Ann Halverson created this Life Tributes page to make it easy to share your memories.