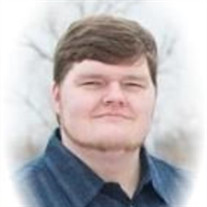 Zachary Zane Brockway died on September 11, 2020 at Kadlec Hospital in Richland, WA from a pulmonary embolism. Zach (as he was known to his family and friends) was born October 12, 1987 to Darvin and Virgina Brockway. He was the younger brother to Adam. Zach attended grade school, middle school, and high school in Miles City. He was active in the athletics program, playing football and wrestling. Zach had a lifelong love of both animals and music and the Seahawks. In 2002, after Darvin's death, both Adam and Zach were adopted by Mary Lou Brockway. They gained three older sisters; Crystal, Amber and Jessica. Zach became very close with each of his siblings and his mother. He had something in common with each of them, and as adults they enjoyed each other's company. After graduating high school in 2006, Zach spent time with his friends in CO. He moved to the Tri-Cities WA (Pasco, Kennewick, Richland) in 2009. At that time, he worked at the Columbia Basin Community College at the library and attended classes. He earned his AA in Business. After school he never stopped learning. He was an avid reader and self-taught himself many skills. He worked for the Benton County Humane Society during which time he went on air weekly to promote a pet of the week. Zach also worked with the gaming community as a community manager for Red Level Games in the Tri-Cities. In 2012, Zach found his calling. He followed his father's footsteps and went into group-home work. For the last 8 years Zach lived his life passion, helping people. Zach loved to camp. He loved to hike. He loved adventure. He was a gentle soul who never met a stranger. If you needed help, Zach would do whatever he could. He is preceded in death by his father, Darvin Brockway. He is survived by his mother, Mary Louise (Lyle Anderson); sisters Crystal (Michael Bratvold), Amber (Matthew Warren), Jessica (Christopher The) and brother Adam Brockway. He had five nephews (Eddie Bratvold, Micah and Mason Warren, Jameson and Christopher Jr The) and two nieces (Carissa Bratvold Thinglested and Leona The). He also leaves behind many Brockway, Daily and Koss cousins, Grandma Koss, Grandma Daily, his Aunt Virginia Foltz (Auntie Gram) and many friends that he considered family. In lieu of flowers the family requests you send a donation in honor of Zach to your favorite pet charity, Zach's favorite was The Humane Society. A memorial service will be held on Friday, September 18, 2020 at 11:00 a.m. at The First Presbyterian Church in Miles City, Montana. Interment to follow at the Custer County Cemetery in Miles City, Montana. Condolences may be sent to the family by visiting: www.stevensonandsons.com .

Zachary Zane Brockway died on September 11, 2020 at Kadlec Hospital in Richland, WA from a pulmonary embolism. Zach (as he was known to his family and friends) was born October 12, 1987 to Darvin and Virgina Brockway. He was the younger brother... View Obituary & Service Information

The family of Zachary Brockway created this Life Tributes page to make it easy to share your memories.