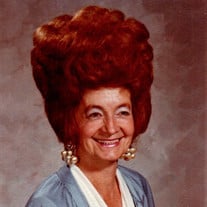 Wilma L Robison Burgess was taken home to Heaven on April 6th, after battling lung cancer. Wilma was born in Colony, Oklahoma on Sept 2, 1930. She attended 1st - 5th grades in a two-room school located on the corner of their farm. She graduated from Colony High School and went on to get her Bachelors and Masters from Southwestern State College in Weatherford, Oklahoma. FAMILY was the MOST important thing to her. Upon losing her first husband, we traveled to Oklahoma every summer to gather at the home place with family who also traveled in. Sleeping many to a bed and head to toe on mats on the floor. We worked hard and played hard together. In her words, "She had two good men in her life." She married Wade H Robison on January 5, 1952 (after dating just 2 months). She lost him suddenly on July 27, 1959. She married Stan H Burgess on August 22, 1970. In 1955, Wilma moved with Wade to Block 16 in the Columbia Basin area to start farming. She never planned to marry a farmer, but it turned out to be an adventure that she would never change. She started teaching at Eastgate so dad could focus on the farming side. Once they settled in, things started to become normal, or as normal as pioneer life would be. Their house was one of the few with running water. "Everyone came to my house to shower. It didn't matter if I was at school or home, someone was always there taking a bath." When she lost Wade suddenly to a heart attack everything changed, but we STILL have the home place and that barracks. "Would I do it again? Yes, I would. You learn to make it. The best part was the people. It was worth every heartache." Before coming to the Kennewick School District in 1955, she taught 4 years in Sayre, Oklahoma. The rest of her career was in Kennewick teaching at Eastgate for 15 years and Park Middle School for 5 years, 2 years as a teacher/"group leader" before spending 15 years as an Assistant Principal there. She loved working closely with the kids and teachers. She loved how creative and talented kids could be. It was important to her for the kids to feel that she was their principal, as a teacher you felt she was your principal, and as a parent you felt she was your principal… representing each of them. She believed in being a good listener, consistent and fair. She NEVER wanted to punish a kid unjustly, for something they didn't do, no matter what. She would have rather they got away with it, then punish them unjustly. She wanted to live with her conscience… to know she did the right thing. She retired from Park Middle School in 1992. About 1965, meeting Stan H Burgess, the Burbank community became and remained close to her heart. Together they began a rental business, with the initial idea of providing affordable small homes to grandparents so they could afford to stay in the community to be close to their grandkids. That blossomed into just providing affordable housing so renters could put money away to be able to purchase a home of their own. The most recent Burbank Event was an Oklahoma Hoedown hosted to friends and family for her 89th birthday at the Burbank Grange complete with Fiddlers, Southern Cooking, Banana Pudding, Open Bar, Country Music and lots of dancing. Donations were accepted for the Burbank Grange. She loved playing all sports, her favorite being (short stop) softball. She REALLY enjoyed playing pool. Playing with friends, partners, some parents and sometimes just a patron. Back in the day, they had 64 teams. She enjoyed the FUN competition with many trophies to show for it. She liked to help people (locally), whatever way she could. She CARED about people, regardless of who they were. She always said, "I am who I am" and considered herself an old country girl. Mom felt so blessed to be surrounded by so much love during her illness through your cards, letters, flowers, notes, voicemails, calls, video wishes and texts. Know she saw/heard each of them with deep appreciation. Wilma is survived by her son Wade L Robison, daughter Marjzon Lopez-Wade, beloved grandchildren Alyssa, Derrik, Ashley and two great-grandchildren Josiah and Isabelle. Wilma is also survived by her sister Gwendola (Fred) Taylor, brother Don Scales, relatives galore and countless friends. She was preceded in death by her parents Charlie and Edith Scales; her husband Wade H Robison; brothers Darwin Scales, Duriel (Duke) Scales, Leon Scales; sisters Dorothy Banister, Charlotte Nutry, Margaret Garrett; husband Stan H Burgess. Wilma will be laid to rest at Bethany Cemetery in Colony, Oklahoma. Memorial services will be scheduled at a later date when we can gather to celebrate her life.

Wilma L Robison Burgess was taken home to Heaven on April 6th, after battling lung cancer. Wilma was born in Colony, Oklahoma on Sept 2, 1930. She attended 1st - 5th grades in a two-room school located on the corner of their farm. She graduated... View Obituary & Service Information

The family of Wilma Burgess created this Life Tributes page to make it easy to share your memories.