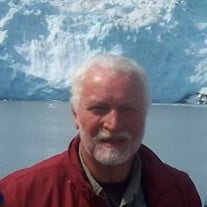 William "Bill" Platts was born December 17th, 1943, to Margaret "Harper" Platts and Jesse Platts. He passed on November 17, 2021, at home with family. He was one of six children, Lyle, Richard "Dick", Carol, Robert "Bob" and John. Being raised in Bonners Ferry, Idaho turned his mind to the wild places and he developed a love of hunting and fishing that he carried with him all of his life. He was very close to his father, whom he lost when he was fifteen years old. For a time, he was lost and he moved in with his aunt and uncle, June and Bill Cottrell, who became a second set of parents. He graduated high school in Black Foot, Idaho. After graduation, he went on to the University of Idaho, where he met the love of his life, Jennifer "Jenny" Brunzell. They were married in 1965 and shared a beautiful life together until she passed in 2007. He never married again and when asked why said, "Who could I love when I have already had the best?" His family takes comfort in the knowledge that he has been reunited with his beloved. He and Jenny had two children, Seth and Camas. He and Jenny obtained their bachelor's degrees from the University of Idaho. Bill then enlisted in the United States Army as a lieutenant. In 1970, he was sent to Vietnam as part of the 101st. Since he was a boy, Bill had always dreamed of being an attorney. He wasn't a great student in his early college years but did well on the entrance exam. He said that Jenny had tutored Dean of University of Idaho College of Law's child and the Dean told him to enroll in the law school when he returned from Vietnam; he always said the Dean must have figured he wasn't coming back. After graduating from law school in 1974, he started a private practice in Kennewick, Washington. He later became a deputy prosecutor and finally a court commissioner in Benton County, Washington. He loved his career and time with the likes of William Bartlett, Gene Pratt, Larry Ziegler, Kurt Ludwig, and countless others. He retired in 2009. He always wanted to help people and his duty as a judge also involved guidance. He leaned on the defendants without a high school education to get a GED and promised to dance on the courtroom bench when he retired if they would get their education. He made good on the promise- an event that will forever be memorialized in the Tri-City Herald. Bill was always a caregiver. His older sister Carol said that once when they were young, she was frightened by a storm. He came to her room and hugged her and told her it would be okay. Later in life, he took in his father-in-law, George Brunzell, whom he loved deeply. George lived with the family from 1975 to 1990; as the toll of age overcame George, Bill was always there to comfort and support him. Later, he cared for his mother in her last years and spent two years with Jenny as she walked through her final journey. His unyielding and selfless devotion to everyone else over and above any concern for himself is a testament to all. During his college years, he developed a deep bond with a group of friends. Two of them, Kurt Seymour and Ray Barker, remained constant companions and the group later added Lee Wimer. For years, October hunting season in the Seven Devils was the most anticipated event. Weeks would be spent on Elk Camp, an almost legendary place in the tales Bill would spin. Bill and Ray went on a series of remarkable adventures each year; until the end he lived every minute of life and left nothing on the floor. They would travel the Alaskan Highway, swim in the arctic, fish for salmon on the Kenai, hit every park in the west on two extended road trips, and for two years attended the PBR Rodeo in Las Vegas. Two grumpy old men having the time of their lives until the very end. When I was a very young boy, my neighborhood friends and I would sit on the street and argue about who had the toughest dad. We would set up imaginary fights and I was sure dad could take them one at a time or all at once. I thought he was a superhero and certainly the toughest dad around- and, maybe I was right. But his strength wasn't just physical- even as he aged it never left. Dad's strength was intangible in the unseen attributes of honor, loyalty, a devotion to truth and what is right, and the love of family and friends. He was the best son, brother, husband, father, grandfather "Da", and friend that a person could have, and he is irreplaceable. Bill is survived by his sister Carol, and brothers Bob and John. He leaves his son, Seth Platts (Jennifer), and daughter, Camas Murry (Kenneth). He had seven grandkids, Michaela, Katilynn, Malachai, Isaac, Kaylee, Austin, and Parker and one great-grandchild, Aubree- his "Aubs," who was his partner in crime for the last five years. One could write a book on his life and some of the important details have been missed in this brief telling, but his story does not end. Godspeed, we love you very much, and tell mom hello from all of us.

William "Bill" Platts was born December 17th, 1943, to Margaret "Harper" Platts and Jesse Platts. He passed on November 17, 2021, at home with family. He was one of six children, Lyle, Richard "Dick", Carol, Robert "Bob" and John. Being raised... View Obituary & Service Information

The family of William Ralph Platts created this Life Tributes page to make it easy to share your memories.